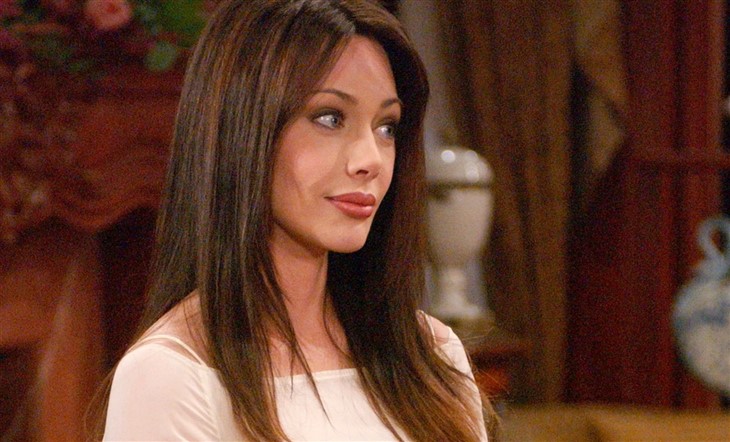 The Bold And The Beautiful Spoilers indicate that Taylor Hayes has been recast. Krista Allen, former Billy Reed from Days of Our Lives has taken over the role. Is Taylor returning to Los Angeles amid Sheila Carter’s (Kimberlin Brown) latest reign of terror?

The Bold and The Beautiful’s executives’ decision to recast Taylor came as quite a shock to fans who assumed that Hunter Tylo would be approached if Taylor returned home. Taylor originated the role in 1990 and has played the role ever since. Tylo has left the show from time to time and was last seen in 2019 with the Forresters.

Entertainment Weekly was the first to report the news and Allen is set to start taping Thursday, October 28th at Television City. Taylor’s first scenes are rumored to be with her daughter Steffy Forrester (Jacqueline MacInnes Wood) and ex-husband, Ridge Forrester (Thorsten Kaye). According to reports, Tylo was unable to return to the show so executives reach out to Allen to offer her the role.

One of Allen’s best-known roles is obviously Billy Reed, which she played from 1996 – 1999. Allen is also known for roles outside of soaps as well as Jenna Avid on “Baywatch” and Bridget Kelly on “What About Brian.” Allen’s most recent role was in The CW’s “Significant Mother”. Allen has also appeared in episodes of “911”, “Modern Family”, and “Castle”. Allen has had starring roles in the following TV movies “The Wrong Mr. Right,” “The Wrong Stepfather” and “I Almost Married a Serial Killer.”

The Bold and the Beautiful’s Taylor has been Sheila’s victim before. In October 2002 Sheila shot both Taylor and Brook Logan (Katherine Kelly Lang). Brook had minor injuries but Taylor was presumed dead after this incident. At the time, Eric knocked Sheila out and called an ambulance. Both Brook and Taylor were taken to the hospital but Taylor was gone for two and a half years, she returned in April 2005. Sheila went to jail for a year but returned in 2003 for a kidnapping story.

The Bold and the Beautiful Spoilers: Quinn Loses Her Mind, Reverts To Form When She Finds Herself With Nobody #BB #boldandbeautifulhttps://t.co/N6YFuvyjN9

Will Taylor come home and help put a stop to Sheila before she gets her hands on Steffy’s baby? Will Taylor help pick up the pieces after Sheila blows Steffy’s marriage apart? Can Taylor survive another run-in with Sheila?