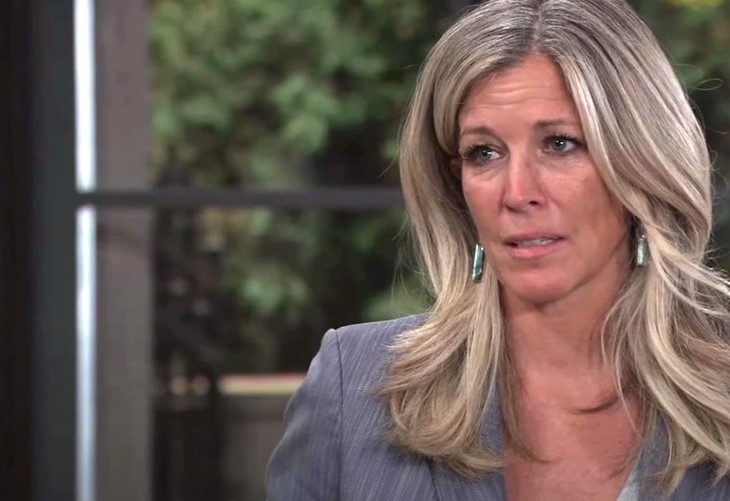 General Hospital (GH) spoilers and updates tease Carly Corinthos (Laura Wright) has had to deal with an unexpected turn of events. Carly believed that her husband Sonny Corinthos (Maurice Benard) was dead. She had to find a way to take over his mafia organization without him. She had been able to turn to her longtime friend Jason Morgan (Steve Burton) for support.

Carly and Jason believed that they would need to get married to assure the other mafia families that they could run Sonny’s organization as a united front. Carly and Jason were shocked when Sonny came back to them on their wedding day.

Carly and everyone that cares about Sonny were overjoyed to have him back. Sonny is important to Olivia Quartermaine (Lisa LoCicero). She and Sonny share a son Dante Falconari (Dominic Zamprogna). Olivia has been dealing with her own problems. Olivia and Carly have decided that they need a night out on the town and have gone to The Savoy.

Olivia has been concerned about her son Leo Falconari (Easton Rocket Sweda). Olivia believes that Dr. Austin Gatlin-Holt (Roger Howarth) has been using him to try to get shares in the Quartermaine family company ELQ. Austin wanted to get the shares to honor his father Jimmy Lee Holt (Steve Bond) who was disowned by his father Edward Quartermaine (John Ingle). Austin believes that Leo could have autism.

Austin has been trying to convince Olivia and her husband Ned Quartermaine (Wally Kurth) to get Leo tested for autism. Olivia has been against the idea and it has caused trouble with her marriage to Ned. Olivia believes that Leo is just different from others and does not need help. Olivia could find that it helps her to talk to Carly about what has been happening with Leo.

Carly has been grateful that Sonny has returned home. Carly found out that Nina Reeves (Cynthia Watros) knew that Sonny was alive and living in Nixon Falls, Pennsylvania. Sonny believed that he was a bartender named Mike who worked for Phyllis Caulfield (Joyce Guy) and her late husband Lenny Caulfield (Rif Hutton) at their family business The Tan-O.

Nina was going to tell Carly that Sonny was alive but decided against it because she got upset with Carly over their grandson Wiley Quartermaine-Corinthos (Caleb and Kyler Ends). Carly does not know that Nina and Sonny got close and were in a romantic relationship in Nixon Falls. Carly is furious with Nina and believes that she should have to pay in some way over keeping the knowledge that Sonny was alive and away from her and everyone that loves Sonny.

General Hospital Carly and Olivia need to find a way to solve their problems. They may be able to find a way to get started while they are at the Savoy. Olivia needs to decide if she is going to take Austin’s suggestion to get Leo tested for autism. Will Olivia decide to get Leo tested to see if he has autism? Olivia will need to figure out what she wants with her relationship with Ned. Will Olivia decide to stay with Ned or divorce him?

Carly has been trying to get back to her life with Sonny. Can Carly find a way to move forward with Sonny? Carly wants Nina to be brought to justice because she kept Sonny being alive a secret but she does not know everything that happened between Sonny and Nina in Nixon Falls. Will Carly be able to understand what happened between Sonny and Nina? Be sure to catch up on everything happening with GH right now. Come back here often for General Hospital spoilers, news, and updates.