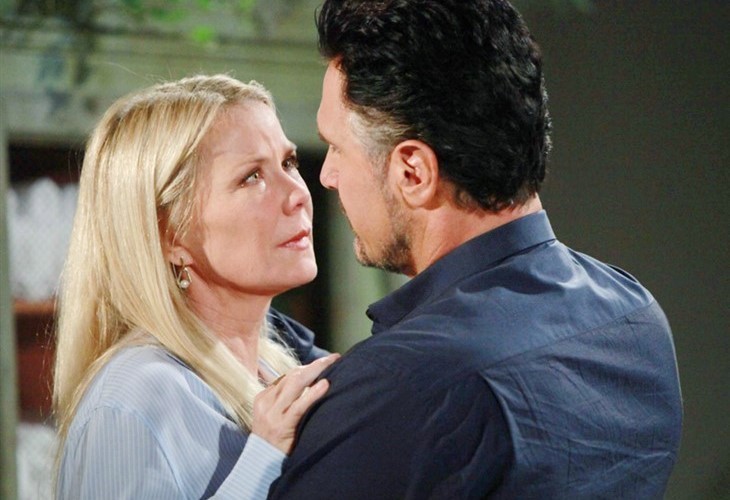 The Bold and the Beautiful (B&B) spoilers indicate that Brooke Logan (Katherine Kelly Lang) and Bill Spencer (Don Diamont) might rekindle their affair.

Bill’s marriage to Katie Logan (Heather Tom) is officially over. Yet, he’s not giving up so easily. To win back Katie, Bill’s seeking help from Brooke. However, his plan takes an unexpected turn when he and Brooke rekindle their affair.

Brooke has been a source of contention for Katie and Bill for a while. Years ago, the two embarked on a steamy affair, which was ousted by Brooke’s longtime rival Taylor Hayes (Hunter Tylo).

Eventually, Katie was able to forgive Brooke, and would reconcile with Bill. However, Brooke once again would cause issues for the couple. Thanks to Quinn Fuller (Rena Sofer) and Shauna Fulton (Denise Richards), a video of Brooke and Bill kissing went public for everyone to see.

An upset Katie left Bill, and despite his best efforts, she refused to give him another chance. Katie’s distrust was a huge reason in her decision to end their relationship.

Bill has his heart set on reuniting with Katie. The one person who can convince her to give him another chance is Brooke.

Brooke is Bill’s biggest supporter, and she wants what’s best for him and Katie. In her opinion, Bill and Katie belong together. Yet, Ridge Forrester (Thorsten Kaye) won’t be too happy with Brooke and Bill working together.

Brooke’s made it known Ridge is her destiny, the man she wants to be with. Yet, as B&B fans know, she has a tendency to stray. With Brooke helping Bill, history may repeat itself.

The Bold And The Beautiful Spoilers  – Another Round Of Brill

Although Brooke maintains she and Bill are only friends, neither she nor Bill can forget about their romance. Those old feelings they tried so hard to ignore might start to resurface.

Bill says Katie is the love of his life, yet his actions speak otherwise. He’s cheated on her multiple times with Brooke, and another round of their torrid affair could be coming.

Of all the people to help with his plan to win back Katie, Bill choose the woman who played a role in the destruction of his marriage. One can’t help but wonder does Bill really want Brooke’s help or is he trying to rekindle their romance?

Whatever his reason, B&B seems to be dropping a hint that Brill will be back. Although Brooke and Bill will try to refrain from acting on their urges, the temptation will be hard to resist. Brooke and Bill once again stand to lose a lot if they reignite their affair. Ridge will walk out on Brooke, and Bill will lose what is probably his last shot with Katie, who was right about not trusting him.