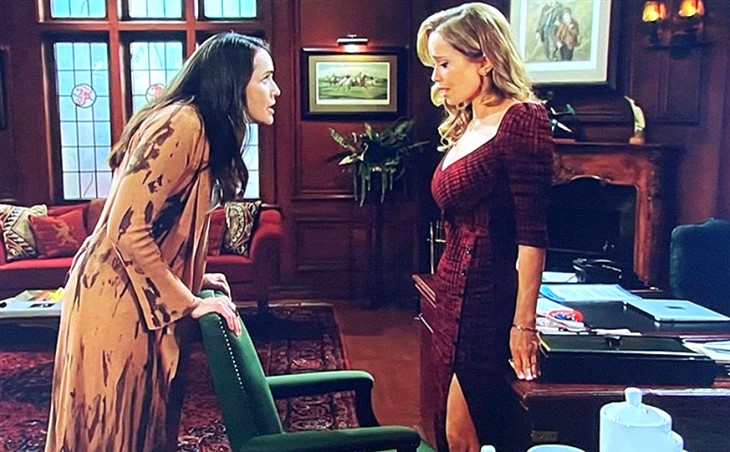 The Bold and the Beautiful (B&B) spoilers document that Quinn Fuller (Rena Sofer) sternly referred to herself as Mrs. Eric Forrester. Donna Logan (Jennifer Gareis) did not expect Quinn to thrust herself into the Forrester Creations main office and behave like an interrogator. But that happened while Eric Forrester (John McCook) was at home talking with Brooke Logan Forrester (Katherine Kelly Lang) about possibilities.

Sofer’s character misinterpreted what she overheard Brooke telling Eric in the mansion. Considering the depth of information that all involved characters already know, it stands to reason that Eric will learn that Quinn intentionally intimidated Donna and then staunchly defend her.

Deric seemed possible. But Eric was not rushing into a reunion with Donna.

How just that Quinn’s impulse will likely serve as the impetus for her boot from Queric. She falsely believes that Eric cheated on her, which contrasts the trust he maintained for Quinn in recent months.

Eric forgave the affair that Quinn had with Carter Walton (Lawrence Saint-Victor). Then Eric allowed Quarter to continue as part of his misguided attempt to preserve Queric.

Donna is the polar opposite of what Quinn is. Gareis’ character is sweet, soft-spoken, compassionate, and not all about herself.

Fans of Deric project that a revival of this couple is the right way for Eric to go and for TPTB to shift the arc of McCook’s character. Queric offered plenty of great drama. But it is time for something fresh.

Revisiting this area of Eric’s past life will also allow Gareis to realize more on-screen time, which this actor deserves.

The Bold And The Beautiful Spoilers – Eric Forrester’s Clear Choice

Eric’s choice is not between the romanticized image of Quinn that exists in that often-shown portrait that hangs above his mantel in the mansion. No, the conflict in Eric’s heart centers upon what he thinks of who Quinn represents now.

Donna’s renewed importance is reflective of the option Eric has. If he wants to move on, then Donna will be waiting.