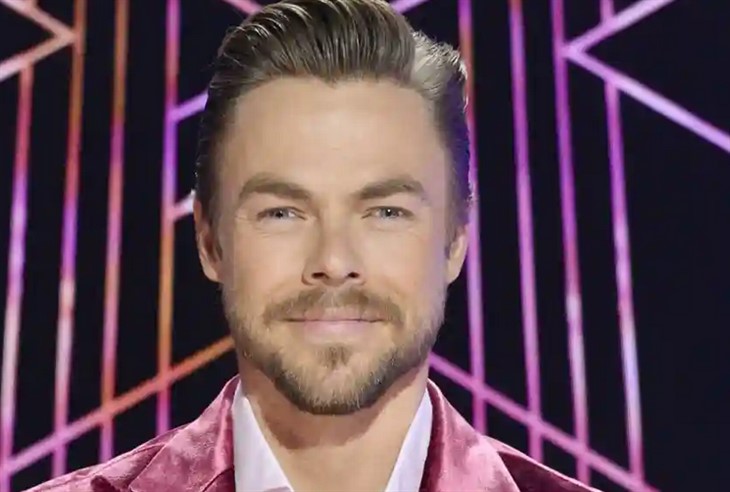 Dancing With The Stars (DWTS) spoilers show the new season has already pirouetted itself into controversy. And with the debate comes slams for one DWTS judge in particular. Sorry, Derek Hough, but the hottest backlash seems directed at you!

What exactly did this cheerful, talented young Dancing With The Stars judge do to earn so many slams? Find out how Derek Hough annoyed so many DWTS viewers and contestants! (Warning: Spoilers including a YouTube video await below if you haven’t seen the DWTS “Grease Night” episode!).

“Grease Night” on Dancing With The Stars turned into an evening of one stellar performance after another. And one couple in particular stood out for many DWTS viewers. “The Talk” guest host Amanda Kloots performed the Viennese Waltz with her pro dance partner Alan Bersten.

As Amanda and Alan waltzed to Frankie Avalon’s “Beauty School Dropout” from the film “Grease,” the 39-year-old star wowed in her pink frock and curly wig. And three of the judges could see nothing wrong with their stunning performance.

For instance, DWTS judge Carrie Ann Inaba praised the couple for their elegant technique and ability to tell the song’s story. And she, as well as her co-stars Len Goodman and Bruno Tonioli, gave Amanda and Alan a perfect 10 for their scores. But one judge disagreed.

Derek Hough did call Amanda “consistently fantastic.” But Hough then rated the couple a 9 rather than a perfect 10. And that got fans riled up.  Check out Amanda Kloots’ Viennese Waltz below and see if you agree with the viewers who slammed Hough.

As a result of Derek disagreeing with the other DWTS judges, Hough faced slams from fans. DWTS viewers on various social media platforms united to bash Derek for his failure to give Amanda Kloots a perfect 10.

For instance, one fan wrote that Amanda deserved a “perfect score” for her “really good” performance combined with her partner’s stellar choreography. And another called her performance “amazing,” adding, “She deserved four perfect scores.” One DWTS viewer summed up the backlash by writing, “This was her best dance. It was flawless.”

Dancing With The Stars Spoilers – Winners And Losers

Along with the backlash for Derek Hough, “Grease Night” proved to provide some clues as to winners and losers. And some DWTS viewers thought they could already predict the top three contenders for the coveted Dancing With The Stars Mirrorball Trophy.

“[Amanda Kloots] is just perfection,” declared one DWTS fan. “I think this entire contest is going to come down to Her, JoJo and Olivia. That’s my prediction for top 3 for sure.” And the vote for DWTS contestant JoJo Siwa and her partner, Jenna Johnson, got supported by judges, who gave the couple this DWTS season’s first perfect score!

But the good news for possible winners got accompanied by bad news for some losers. In particular, as shown in the video below, the DWTS contestants in danger of elimination this week were Melanie C dancing with pro partner Gleb Savchenko and Olivia Jade performing with her pro dancer Val Chmerkovskiy. Who would survive Week 5 (Grease Night) of Dancing with the Stars 2021? The video reveals the heartbreak: