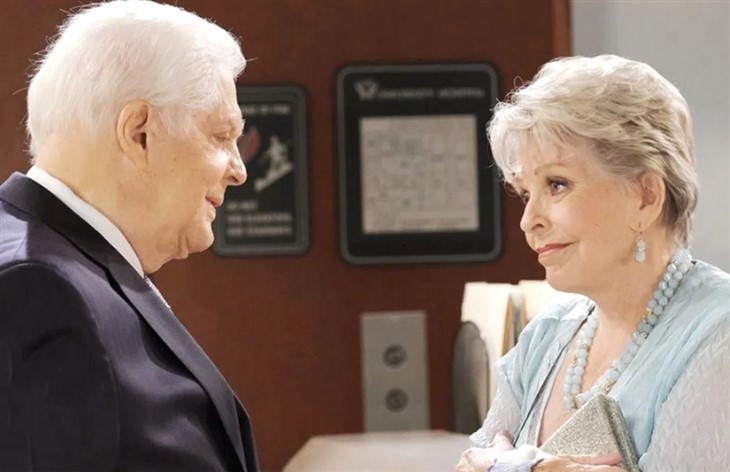 Days Of Our Lives (DOOL) spoilers reveal real-life couple Bill Hayes and Susan Seaforth Hayes repeatedly prove age doesn’t mean anything! At 96 and 78, the actors who play DOOL’s beloved Doug and Julie just took on their most challenging storyline yet.

And as another long-time Days Of Our Lives star just revealed, the Hayes have become “heroes” to both cast and crew. Find out all about Bill’s and Susan’s preparation for the possession plot below. Plus: Join us on a look into how MarDevil has tested this dynamic duo!

For years, Days Of Our Lives star Deidre Hall has always admired her co-stars Susan Seaforth Hayes (Julie) and Bill Hayes (Doug). And now the possession plot has given Hall a new chance to admire and learn from their acting talents.

Talking with Soap Digest, Deidre shared, “I’m very personally close to Bill and Susan; they’re my heroes.” And the DOOL actress recalls leaving one day and observing the two in their dressing room. As Bill sat at a table, Susan relaxed on the coach reading. “I thought, ‘Oh, it’s a lifestyle. I love this,” summed up Hall.

How much time do the Hayes devote to prepping for their DOOL roles? Deidre revealed that Susan and Bill, “both work so incredibly hard on their scenes. You can’t catch Bill where he’s not looking, and you can’t catch Susan where she doesn’t know the dialogue or where she hasn’t thought it through far more clearly than I have.”

Overall, added Hall, the Hayes stand out as, “extraordinary performers, deeply dedicated.” As a result of their dedication to the show and each other, Bill and Susan have become a “couple in the truest sense of the word,” summed up the actress. “They like each other, they love each other, they appreciate each other.”

While the DOOL cast adores Bill and Susan, their current story line has provided fans with new reasons to focus on Doug and Julie. For instance, Doug at first seemed to exhibit signs of dementia. As a result, Julie appeared distraught. With no cure for Alzheimer’s disease, how could Julie save her beloved husband from himself?

But then the truth (in the form of the devil) emerged. Rather than dementia, Doug’s seeming confusion resulted from (drum-roll) the return of the demon to Salem! And that turned into the on-going possession plot. Does MarDevil possess the power to prevent Julie from saving her beloved husband?

Upcoming episodes could answer that question. But what DOOL fans can know for sure: That sweet love story between Bill and Susan both on set and off-stage will never end! So tell us what you think. Do you agree with Deidre Hall that the Hayes have become DOOL’s heroes? And after you share your views, check back on our site for all the Days Of Our Lives news and views.