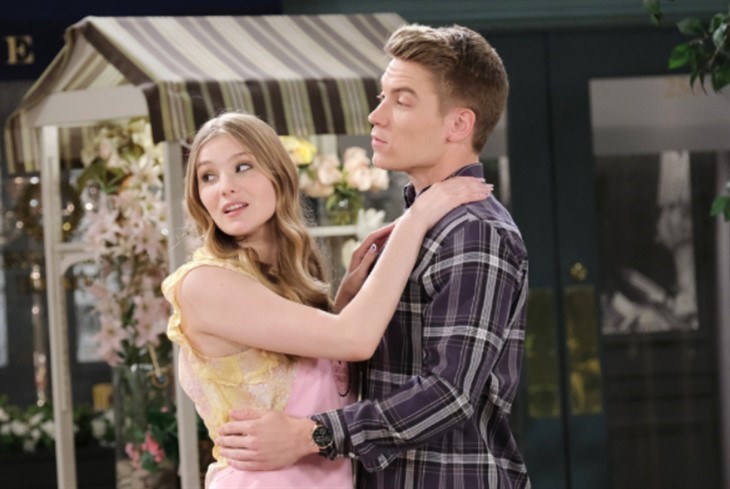 Days of Our Lives (DOOL) spoilers tease that Tripp Johnson (Lucas Adams) will rush to find Allie Horton (Lindsay Arnold) when he learns she may be in danger in an upcoming episode of Days of Our Lives!

Days of Our Lives viewers will recall that the devil’s in the details as the dead are being raised in Salem! In a recent Days of Our Lives episode, a possessed Marlena Evans (Deidre Hall) stood in the cemetery as she called forth Charlie Dale (Mike C. Manning) to rise up! Viewers saw his hand come up out of the dirt as he began clawing his way out of his grave! Days of Our Lives viewers know that if there is anyone who Allie would be in danger from, it would be a resurrected Charlie!

It will soon become apparent that there are at least three undead roaming around Salem – Nick Fallon (Blake Berris) and Deimos Kiriakis (Vincent Irizarry) will also be wreaking havoc at the devil’s commands! More and more Salemites will realize that there’s been a zombie apocalypse unleashed on the town of Salem, and it won’t be difficult to figure out who is behind it!

Days of Our Lives viewers will recall how traumatized that Allie was when she first came to Salem, and eventually got her memories back of the night that Charlie raped her! She had pushed those details down inside her subconscious for a long, long, time and even blamed Tripp for the rape at first – apparently seeing some resemblance between the two men. Days of Our Lives viewers will recall that Tripp and Charlie were half-brothers, sharing a birth mother in Ava Vitali (Tamara Braun). Anyone would be frightened to see a ghost, but to see a ghost who tried to kill them when they were still alive would be very frightening! Somehow, the news that Charlie has been seen alive – or undead – around town will get back to Tripp, and even though as a doctor he won’t believe it something will change his medical mind! Perhaps Tripp will even spot Charlie himself!

Chances are, Charlie will go where he is dispatched by MarDevil – and that will be after Allie! However, that doesn’t mean that he may encounter someone else he threatened or hurt in life beforehand. That could be his and Tripp’s birth mother Ava – and Days of Our Lives viewers can imagine how panicked she would be and she’ll run to warn Tripp!

Days Of Our Lives Spoilers: Steve’s Frantic Search For Johnhttps://t.co/n9lk5YPiRU

It sounds like Rafe Hernandez (Galen Gering) may be otherwise occupied when FrankenCharlie starts roaming the streets of Salem, because undead Nick will be going after Gabi Hernandez (Camila Banus)! Days of Our Lives viewers know that not a lot scares Gabi, but she would definitely be afraid of undead Nick! When Tripp realizes an apparently resurrected Charlie is being seen in Salem, he’ll rush to find Allie, who he knows will be in danger! The only problem is, only death will stop Charlie – and how do you kill someone who’s already dead?