Days Of Our Lives (DOOL) Spoilers: Gabi Tries Frantically To Save Jake’s Life After He Is Attacked! 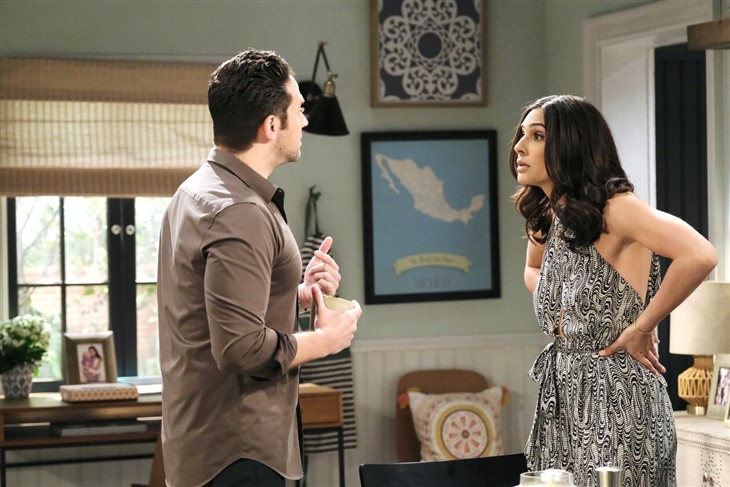 Days of Our Lives (DOOL) spoilers tease that Gabi Hernandez (Camila Banus) will try frantically to save Jake DiMera’s (Brandon Barash) life after he is attacked by an undead Nick Fallon (Blake Berris) in an upcoming episode of Days of Our Lives!

Days of Our Lives viewers will recall that MarDevil, in other words Marlena Evans (Deidre Hall) possessed by satan, went on a resurrection spree in the Saint Luke’s church cemetery after leaving the DiMera crypt, where she had imprisoned John Black (Drake Hogestyn). One of the first people besides John that she wanted to torment was Allie Horton (Lindsay Arnold), and so the first person she resurrected was Charlie Dale (Mike C. Manning) Days of Our Lives viewers can expect that next MarDevil resurrects at least two more very dangerous individuals, one being Deimos Kiriakis (Vincent Irizarry) and the other will be Nick Fallon, who died in 2014 after Gabi shot him three times!

They had dated, been engaged, but their relationship fell apart, and Nick continued to be obsessed with Gabi after she broke it off. Gabi was convicted and sent to prison for a sixteen year sentence, although she was released a year and a half later. It was revealed later that she shot Nick because he was planning to make sure all of Arianna Horton’s (Sydney Brower) loved ones wouldn’t be around her. Julie Williams (Susan Seaforth Hayes) never forgave Gabi for killing Nick, whom Julie had cared about.

Days of Our Lives viewers will see that after MarDevil raises Nick from the dead, he’ll be dispatched by satan in Marlena to wreak havoc although Nick will have all his memories from his time on earth. Gabi has had a rough week, with Jake being arrested after Abe Carver’s (James Reynolds) shooting, but at least he made bail – although he could be considered an accessory.

Abe is able to clear him of the gunshot that got him, but with Carmine Merlino (Richie Stephens) found dead on the kitchen floor at the Hernandez house, there’s no one to charge. Days of Our Lives viewers can expect that somehow undead Nick, still being obsessed and possessive of his ex-fiancée Gabi, will see her and Jake together, and he’ll come after Jake first! With his empowerment by satan, Nick will be much stronger physically in death than he ever was in life, and he will go after Jake and Jake won’t be able to fight him off – and it’s doubtful Jake will get his gun back but even if he does, he won’t be able to kill someone who’s already dead! Of course, MarDevil will laugh fiendishly at her handwork, as she sees from afar Nick throwing Jake into his freshly empty grave and burying him!

Days of Our Lives viewers can expect that after Jake was physically thrown into Nick’s grave after Nick likely trying to strangle him, he will be injured! Gabi may have been close by and saw the whole thing but frightened of the undead Nick, may have been afraid to intervene during the struggle!

The Days of Our Lives weekly preview shows a frightened Gabi digging dirt off the grave as fast as she can, before Jake smothers to death because of the dirt piled in on him! He will be in a very similar situation to Kate DiMera (Lauren Koslow) after Vivian Alamain (Louise Sorel) took out her grief and rage on her by pushing her into a freshly dug grave and covering her over! Luckily for Jake, Gabi will unbury him in time!