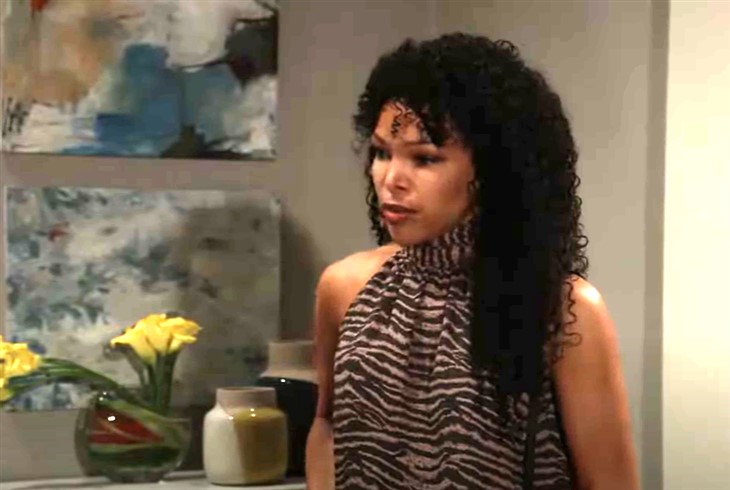 General Hospital (GH) spoilers hint that the mysterious man will continue to be a problem for some of the other characters on the show. This will include Portia Robinson (Brook Kerr) who will be bothered by the man’s presence coming in the upcoming week. Viewers have watched as this mysterious man has run around Port Charles for a while mostly trying to gather information about Curtis Ashford (Donnell Turner) and it seems that he has no intention of revealing himself to Curtis anytime soon but he will continue to make himself known to the ones around Curtis. However, who is this mysterious guy, and will he soon reveal who he is to everyone?

The mysterious man has been making his rounds appearing one day out of nowhere. Right away he seemed interested in Curtis and Portia’s conversation. Viewers watched as Curtis was being watched by the mysterious guy and also began gathering information from him. He would show up at the hospital later on and bump into TJ Ashford (Tajh Bellow) who thought the main might be hurt and offered to check him out. During the course of the check-up, the main asked him questions about his personal life mostly wanting to know more about Curtis which was strange to viewers since he keeps mentioning Curtis. What could be the interest that the mystery man has in Curtis?

The mystery man also would approach Portia later on by “accidentally” bumping into her. However, she would later go on to question if it was really an accident or not. She became concerned when he started asking way more questions about Curtis than she felt comfortable answering. She also noticed that he knew way more information about Curtis than he should and that he could not have known it based on a basic internet search

When she hears about TJ’s experience with the mystery guy she makes sure that the guy is the same one she saw. She fills Curtis in on her experience with him and how it rubbed her the wrong way. However, in upcoming episodes, she may have another run-in with him and this is going to concern her. She will soon confide in someone else about the mystery man but what will she decide to do about him and what will Curtis do about the guy who is so interested in him?