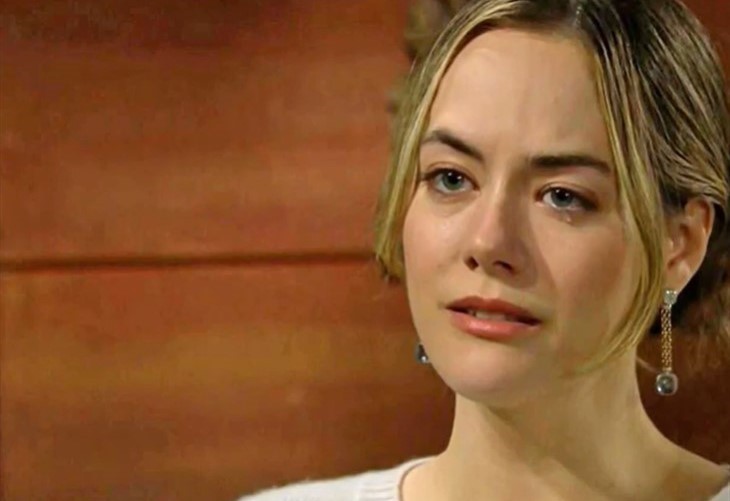 The Bold and The Beautiful (B&B) spoilers and updates tease tension mounts between the stepsisters because of Finn. His wife believes Sheila and Deacon are manipulating him and wants his new confidant to stop encouraging him where his mom and her dad are concerned.

Spoilers for The Bold and the Beautiful indicate that Steffy Forrester Finnegan(Jacqueline Macinnes Wood) is going to go off on Hope Logan Spencer(Anika Noelle} but Hope will stand her ground. Steffy has been hostile ever since Sheila Carter (Kimberlin Brown) was revealed as John Finnigan’s (Tyler Novlin) birth mom. She has become even angrier since learning that Deacon Sharpe is involved with Sheila and that Hope is encouraging Finn to get to know his mom.

Steffy and Hope had been getting along so well and putting the past behind them. All of their progress may now be lost beause Hope and Finn are spending time was so angry at Sheila when she first came to town that she slapped her in the face in front of Finn. Spoilers say Steffy will turn her fury on her stepsister and demand she stops /encouraging Finn to give Sheila a chance. Steffy will tell Hope to stay out of her marriage and to stop encouraging her husband to have a relationship with Sheila.

The Bold And The Beautiful Spoilers – Hope Will Not Back Down

Steffy has been barking out orders to Sheila and Finn and making some unreasonable demands but she will not be able to control her stepsister. Hope wants to get to know her father and believes Finn has the right to do the same with his father. She will not allow Steffy to deter her and this will only make things worse between the two women.

The Bold And The Beautiful Spoilers: Deacon’s ‘Weird Code Of Ethics’ Explainedhttps://t.co/ex8pUseVdy

Steffy is already having a hard time with the fact that Sheila and Finn continue to cross the boundaries she has set. Hope ignoring her will only bring more outrage. Steffy knows Deacon and Sheila are scamming their children but she cannot force Finn or Hope to see the situation for what it really is. This is why she will confront

Hope and spoilers say it will be brutal. Neither woman will concede and things between them will escalate. Steffy will be stunned when Liam’s wife who is usually mild-mannered and rational gives as good as she gets.