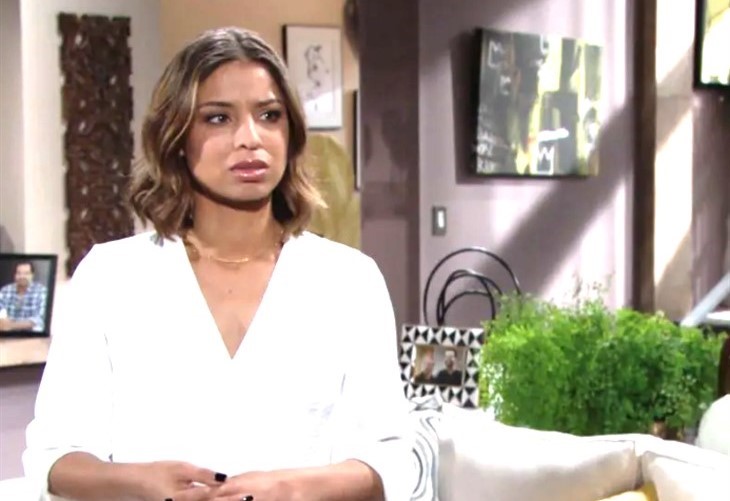 The Young and the Restless (Y&R) spoilers reveal that Elena Dawson (Brytni Sarpy) is absolutely exhausted. While Nate Hastings (Sean Dominic) understands, it also means their relationship could end. Romances die if they are not nurtured. In fact, Nate could be driven into Imani Benedict’s (Leigh-Ann Rose) arms out of loneliness.

The Young And The Restless Spoilers – Imani Benedict’s Crush

Y&R spoilers reveal that before Naya Benedict (Ptosha Storey) had her health crisis, Imani was bonding with Amanda Sinclair (Mishael Morgan). Imani was also interested in Nate and it appeared that a love triangle storyline was forming. That seems to have been backburned for a bit, but it likely isn’t over.

Fans haven’t seen Imani in a while, but that will probably change after Sutton Ames’ (Jack Landron) trial. As Imani explained in a scene months ago, she always gets what she wants. So, she hasn’t given up on Nate and Elena might actually lose him one day.

Elena and Nate split for a bit but ended up back together. When Nate was promoted at the hospital, he had to give up his celebrity doctor gig. However, he suggested to Lily Winters (Christel Khalil) that Elena would be a great replacement.

What fans are seeing now is just how exhausted Elena is all the time. All she does is work and sleep, which means her relationship is suffering and she might not even realize it.

The Young And The Restless Spoilers – Nate Hastings’ Loneliness

The Young and the Restless spoilers reveal that Nate understands Elena’s exhaustion. After all, he is extremely busy and has burned the candle at both ends quite often. However, understanding and remaining faithful are not synonymous. Nate could be feeling very lonely and craving attention from a woman. When Imani returns, fans can count on her to take full advantage of Elena’s exhaustion to get the man she desires.

In soaps, relationships can’t stay happy or it’s death to the characters. Couples always need to have some sort of conflict. This is likely coming for Nate and Elena, especially with Imani making it clear that she will end up in Nate’s arms – and his bed. However, could Elena fight back by doing something so shocking that it destroys her character forever?

The Young And The Restless Spoilers A while back, fans predicted that Elena would end up pregnant. What if Elena fights Imani by either intentionally getting pregnant or claiming to be? Elena has been good for a while and it’s about time for her character to do something controversial. So, we will have to keep watching to see what happens. Let us know your thoughts and predictions about Nate, Elena and Imani.

Be sure to catch up on everything happening with Y&R now. Come back often for The Young and the Restless spoilers, news and updates.