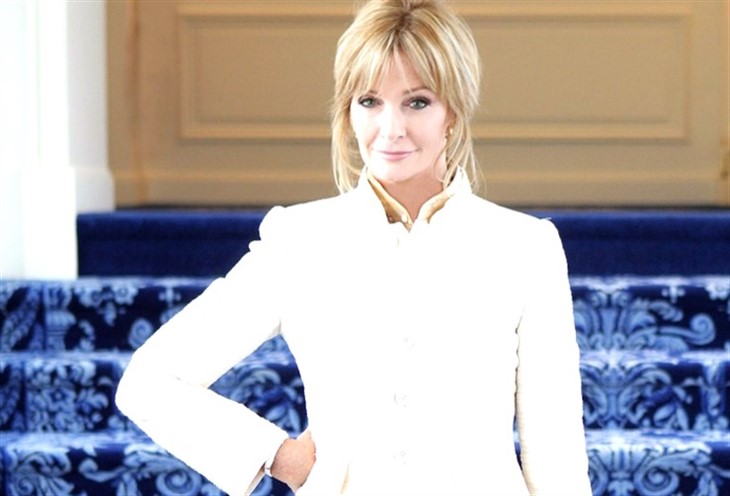 Days Of Our Lives (DOOL) star Deidre Hall has sunk her teeth into the revamped possession plot. And as her character MarDevil has shown, no one in Salem can escape the demon!

But can someone save Marlena herself from the devil? Deidre recently dished up some spoilers. And those hints about future DOOL plots reveal if John once again can step up to banish the demon from Marlena’s soul! Find out what Hall shared below.

Days Of Our Lives star Deidre Hall still remembers the first time that DOOL writers told her about the possession plot. Talking with Soap Opera Digest, the actress recalled what happened in 1994.

“When I heard about [the possession plot] the first time, I was called upstairs,” the actress recalled. “And I was told, ‘You know how all of these things have been happening, with the Christmas presents and the tree being burned? Well, it was you!'”

As a result of that experience, Deidre felt “a low level of concern” when she learned that writers would revamp the possession plot. And various factors played into her relaxed response. For instance, Hall gushed that she “adores” head writer Ron Carlivati’s writing. “And I think he’s wildly imaginative and daring in his writing,” she praised.

But Dedire did experience one worry. “My concern was, ‘Oh, we’ve sort of been here…’  But then you see that chilling moment where Doug is first possessed and I love the way it’s being done. So my concern was more about repeating a storyline, but the way he’s telling it is so rich, it’s so great. I’m having so much fun with it.”

DOOL Spoilers – What Will Happen Between MarDevil And John Black?!

Looking ahead, Deidre Hall revealed what the future holds for MarDevil and John. And the actress issued a warning about how the demon has changed Marlena. “[MarDevil is] mean. She’s hurtful. She is completely behaving out of character and she frightens people,” cautioned Hall.

But despite MarDevil’s “plotting and planning,” John stands alone in possessing the potential to banish Marlena’s inner demon. Who will win in a battle between MarDevil 2.0 and John? Deidre offered some clues.

“[MarDevil] would like to keep it quiet for as long as she can,” pointed out Hall. “Who wants to be watched when you’re trying to do all of this evil stuff? But I don’t think underneath all of it, she’s really concerned about John.”

And Deidre listed several reasons why she thinks that John could fail to banish Marlena’s inner demon for the second time. For instance, MarDevil now possesses the power to “do anything,” warned the actress. As a result, John could experience a horrible accident, such as “trip off the ledge of the apartment,” she hinted.

Days Of Our Lives fans should prepare for MarDevil to shift her focus to a popular super couple, added Deidre Hall. Because “John is not a life threat to her,” MarDevil keeps her eyes on the prize. And that’s actually two-fold.

First, MarDevil wants to get “Ben and Ciara to have a baby,” shared the actress. And second, the demon desires to prevent visitors from spending time with Doug. So could Doug be the one to out MarDevil?

“Oh, yeah. He’s going to tell everybody that she’s possessed because he knows,” Hall noted. “And he and Marlena have had that conversation.”

Deidre also urged DOOL fans to enjoy the upcoming “special effects.” Promising upcoming episodes will be “more exciting” than the original possession plot, Hall shared her enthusiasm. “For me, it’s getting to play a little more wicked than I normally get to play,” she summed up.

What do you think about the Days Of Our Lives possession plot? Share your DOOL views with us! And be sure to check back on our site for all the soap opera news and spoilers.