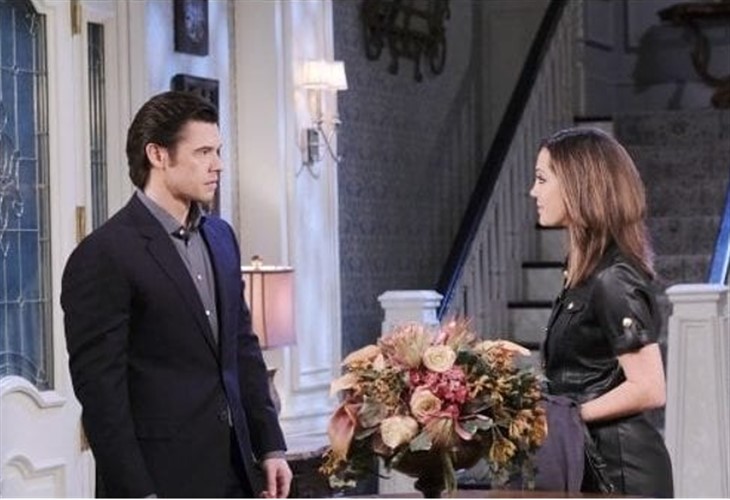 Days of Our Lives spoilers tease that Xander Cook (Paul Telfer) will make a supreme sacrifice to free Gwen Rizchech (Emily O’Brien) in upcoming episodes of Days of Our Lives!

Days Of Our Lives Spoilers – The Million Dollar Question

Days of Our Lives viewers will recall that Xander owes EJ DiMera (Dan Feurreriegel) one million dollars, and District Attorney Melinda Trask (Tina Huang) is basically holding it hostage as evidence in her investigation into the murder of Calista Lockhart (Cady Huffman). Days of Our Lives viewers will recall that Calista forced Bonnie Lockhart (Judi Evans) to steal it from Xander, and it was part of the crime scene when Calista’s dead body was found in the bed in Justin Kiriakis’ (Wally Kurth) bedroom at the Kiriakis mansion the day he and Bonnie were getting married.

DOOL Spoilers – Victor Kiriakis Keeps Up His Part Of The Bargain But Will Melinda Trask Keep Up Hers?

Days of Our Lives viewers will recall that Victor kept up his end of the bargain when he hired Steve Johnson (Stephen Nichols) to bring Kristen DiMera (Stacy Haiduk) in, and Kristen was captured at John Black (Drake Hogestyn) and Marlena Evans’ (Deidre Hall) townhouse in a recent episode of Days of Our Lives! Trask has her prize, and she should drop the charges against at least Justin and Xander, although Days of Our Lives spoilers do have Justin and Bonnie getting married by the end of the week – so that might mean Gwen gets out as well.

It’s possible that Xander might tell her to keep the million, or EJ might pressure her for it as well. Fair is fair, as long as both couples are freed Xander was supposed to pay EJ with that money so even if Xander pays her off with it to free Gwen and EJ gets it back from her it will serve the purpose. However, there is a secret Kristen could dangle in front of Xander, trying to bribe him to break her out – and that’s his lost love, Sarah Horton (most recently Linsey Godfrey).

Days Of Our Lives Spoilers – Somehow, Sarah Horton’s Kidnapping Will Come To Light

Days of Our Lives viewers know that once Sarah Horton’s kidnapping and location come to light, Xander could drop Gwen like a hot potato, but perhaps not. Kristen holds the key and is the only one who really knows what happened to Sarah – and it wasn’t what people thought when Kristen impersonated her. Days of Our Lives viewers will recall that Kristen disguised as Sarah packed her up, drugged, and shipped her to a remote Greek island – possibly even the one that Xander owns!

She then fooled everyone in Salem into thinking that Sarah had dumped Xander for her ex Rex Brady (Kyle Lowder) but then she dumped him too once they were out of Salem! Considering Kyle put on his Instagram several months ago that he’d been back filming,

Rex could show up any day and blow the whole Sarah story wide open as well! When Gwen finds out Sarah’s alive and Xander’s rescuing her, she could worry she’ll lose him to his formerly lost love – but another million dollar question is, what mental state will Sarah be in, and will he find her alive? She would have needed serious medical care in that shape and Kristen wasn’t going to do it! If Xander does find Sarah alive and bring her back, she may not even be in her right mind!