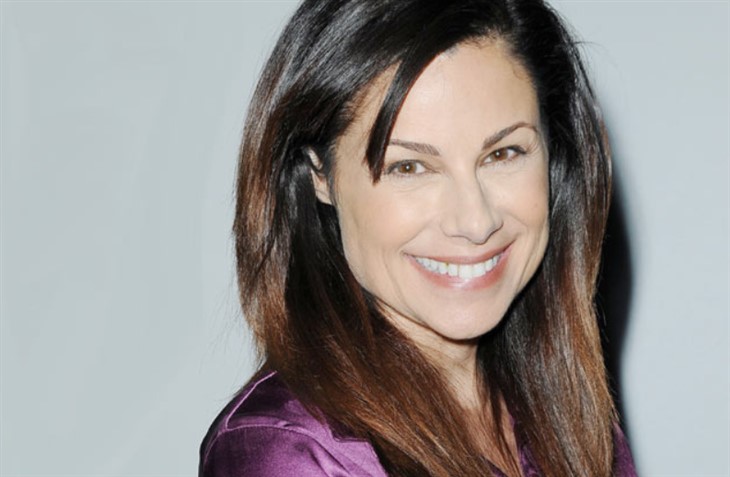 General Hospital (GH) spoilers and rumors tease that Marie Wilson may be replacing Rebecca Budig as a recast Hayden Barnes in future episodes of General Hospital!

General Hospital viewers will recall that there has been a lot of talk about Hayden recently, with Nikolas Cassadine (Marcus Coloma) claiming that Hayden is still alive. The last time Hayden was seen was over a year ago, when Nikolas scared her out of Port Charles, and she left her and Dr. Hamilton Finn’s (Michael Easton) young daughter Violet Barnes Finn (Jophielle Love) with Finn. No word, no hint of her survival has come yet, and even when her mother Naomi Dreyfus (Gigi Bermingham) showed up she claimed to have not heard anything of her either – and later was found murdered in her hotel suite!

However, Nikolas’ claim that she is alive, as nonsensical as it seems to General Hospital viewers, allows room in the storyline for a recast! Rumor has it that the recast may be an actress who formerly played Karen Wexler, the daughter of Scott Baldwin (Kin Shriner) and Rhonda Wexler (Denise Galik-Furey) from 1999-2003,when the character was killed off. The actress’ name is Marie Wilson.

General Hospital viewers who happen to watch Days of Our Lives would recognize Marie Wilson more recently as Summer Townsend, a character who was recently killed off there. Summer was the alcoholic oldest daughter of Maggie Kiriakis (Suzanne Rogers) who had spent some time with her after she found out she had terminal liver disease. General Hospital’s Karen Wexler was a drug addict raised by an alcoholic mother, and also a stripper, who overcame her addictions to go on to become a doctor at General Hospital. She was also married to Jagger Cates (Antonio Sabato, Jr.) at one time,

Stone Cates’ (Michael Sutton) older brother. Jagger and Karen eventually divorced, and she once dated Jason Morgan (Steve Burton) many years ago when he was in medical school and still going by Jason Quartermaine. She was also a lover of Sonny Corinthos’ (Maurice Benard). Karen died on the General Hospital spinoff Port Charles, after being hit by a car in 2003.

General Hospital viewers may also recall Marie from when she played Meg Snyder on As The World Turns from 2005-2010. She also played an additional character on Days of Our Lives named Bree Tjaden from 2014-2015. General Hospital has made no formal announcement of a recast for Hayden Barnes as of this writing, so until they do the recast role being taken over by Marie Wilson of course is a rumor.

However, as mentioned previously, hints in the dialogue of recent General Hospital episodes, particularly by Nikolas Cassadine, would allow for the return of Hayden. General Hospital usually tapes episodes approximately six to eight weeks ahead of airdate, so there is a possibility there may be something in the works; plus, there are hints that Jeff Webber, last played by Richard Dean Anderson could return or be recast. Jeff Webber is Hayden Barnes’ birth father as well as Elizabeth Baldwin’s (Rebecca Herbst), and Elizabeth and Finn have been getting closer. It could make for an interesting triangle!