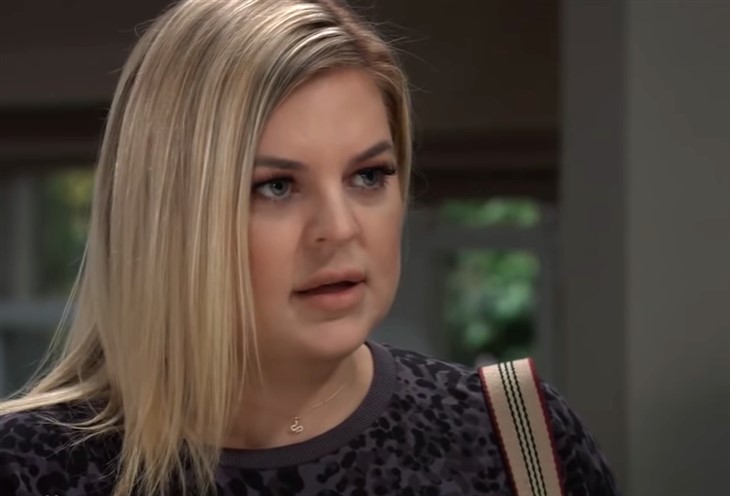 General Hospital (GH) spoilers hint that Maxie Jones (Kirsten Storms) may soon feel that Chase may not have the best motives when comes to trying to find Maxie’s baby. As viewers know, Chase has recently been looking into the case of Maxie’s “missing” baby.

This has set off some alarm bells for Maxie who’s baby is in the care of Brook Lynn and she is worried that the true identity of Brook Lynn’s baby will be revealed. However, it seems that is not the only thing that will be on her mind as she may think that Chase is up to something and may have his own reasons for looking into the case of Maxie’s missing baby. However, what could it be?

Maxie and Brook Lynn Quartermaine (Amanda Setton) have had a lot on their plates lately as they had to come up with a plan to keep Maxie’s baby safe. This included Brook Lynn passing Maxie’s baby as her own until Peter is caught and the baby’s safety is guaranteed. However, this means that many people are being lied to and have to be kept in the dark.

This includes the people working on the case as well as Valentin Cassadine (James Patrick Stuart) who thinks that Maxie’s child is really his along with Brook Lynn. However, Gladys Corbin (Bonnie Burroughs) recently learned that Brook Lynn’s baby is not Valentin’s which she could reveal at any time. This could cause problems for Maxie’s baby and lead Peter August (Wes Ramsey) closer to knowing the truth.

Along with that, Maxie is going to have doubts about Harrison Chase (Josh Swickard) as he continues to dig into the case himself. Maxie may feel that his motives may not be as pure as he is trying to make them seem. Could it be that Chase is catching on to something and what might be making Maxie think that he is up to no good?

Will Brook Lynn share the same opinions as Maxie? The two have been working closely together and will be making plans on how to keep their secrets hidden. So if they feel something is wrong, they will figure out a way to keep their secret hidden from Chase. Keep checking Hollywood Hiccups for more General Hospital spoilers, news, and updates.