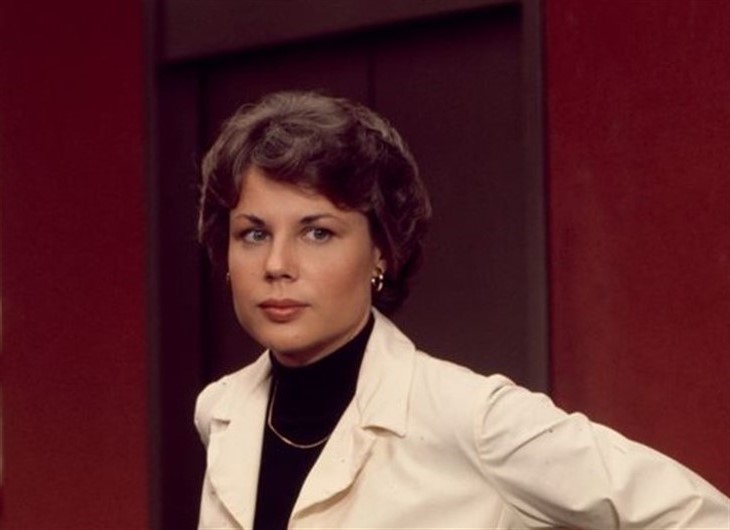 Days of Our Lives spoilers report that actress Linda Carlson, who played Dr. Elaine Schaefer in a storyline in 1989 on DOOL has passed away at the age of 76.

Longtime Days of Our Lives viewers will recall that Dr. Schaefer worked at the Salem Veterans’ Administration Hospital, during a time when Jack Deveraux (Matthew Ashford) was investigating a story involving Cal Winters, (Wortham Krimmer) an Army lieutenant who was thought to have died. Cal showed up in Diana Colville’s (then Genie Francis) office at the Spectator days before she was to marry John Black (Drake Hogestyn). Cal was sick, and was admitted to the hospital but the illness wasn’t terminal. Cal was someone that Diana had once been involved with, and had rushed her wedding to John but Cal crashed it and claimed to be her husband.

Diana then tried to prove that Cal wasn’t her husband but he insisted he was. Longtime Days of Our Lives viewers will remember that eventually he admitted their marriage never happened, but he refused to give up on Diana, having been obsessed with her. Cal came over to John’s place with a gun and got into an argument. A gunshot went off and John was hit. Cal was then arrested and John remained in a coma for some time. Cal knew that he was innocent and that it was Diana who shot John by accident. Diana then fled town and Cal was released from prison. Dr. Schaefer was in many episodes during this storyline.

Some of Linda’s other roles after Days of Our Lives were in the soap Passions, and she also appeared in many popular primetime shows in the late 1970s and1980s both before and after Days of Our Lives. She played reporter Katie McKenna in the 1978 series Kaz, and many other popular shows such as Remington Steele, St. Elsewhere, WKRP in Cincinnati, Cagney & Lacey, Scarecrow & Mrs. King and Growing Pains.

She also appeared in an iconic, and at the time, cutting-edge episode of Lou Grant along with General Hospital actress Lynne Moody as rape victims. In 1985 she joined the cast of Newhart, and then played in many films such as Honey I Shrunk The Kids, The Beverly Hillbillies, and more primetime shows of the period including The Father Dowling Mysteries, Above and Beyond, Sisters, Clueless, NYPD Blue, and Providence.

Days Of Our Lives Spoilers – A Short Biography

Days of Our Lives alumni Linda Carlson was born on May 12, 1945 in Knoxville, Tennessee. She knew she wanted to be an actor when she was in high school in the state of Minnesota, and graduated from the University Of Iowa before earning a master’s degree at New York City’s Tisch School of The Arts. She began acting, as many actors do, in off-Broadway shows, and she acted in the off-Broadway production of The Harangues with the Negro Ensemble Company in 1969. In 1973 she made her Broadway debut in Full Circle, with the legendary Otto Preminger directing.

She then went to Hollywood to audition for various television shows, landing the role of Dr. Janet Cottrell on Westside Medical. From then on, she went on to be a staple of 1970s and 1980s television before landing the role of Dr. Elaine Schaefer on Days of Our Lives. Ms Carlson will also be remembered for her philanthropic work, mainly for the Village of Children & Families in Hartford, Connecticut and the Virginia Avenue Project in Los Angeles where she was the president. Our condolences go out to her family, and donations can be made to the ALS Association.

Stay tuned to Days Of Our Lives, and keep checking Days of Our Lives spoilers frequently for all the latest news, updates and developments!