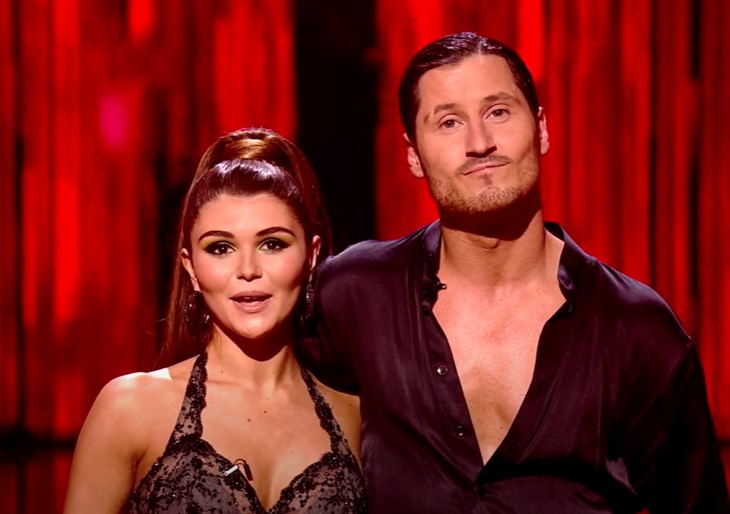 Dancing with the Stars fans saw a double elimination on Janet Jackson Night. As the semifinals approach, competition is very fierce. In fact, the show nearly runs to a close for Season 30. So no matter who goes home right now might seem controversial. This week, fans had mixed feelings about Olivia Jade and Val Chmerkovskiy.

Just a short time ago, fans of Val and Olivia expressed their hopes that Olivia might actually be in line for the Mirror Ball Trophy. That came after their Queen Night performance. In fact, they rolled through to the relay dance with bonus points. Actually, they managed to top the leaderboard. Additionally, they score their first 10s so far. However, that didn’t help them on Janet Jackson Night.

Dancing With The Stars Spoilers Suni Lee Struggles In Season 30

Dancing with the Stars contestants Melora Hardin and Artem Chigvintsev, Jimmie Allen and Emma Slater, and Olivia Jade all stood a chance of going home. Unfortunately, someone had to go. This week, amidst strong competition, Olivia and Val didn’t have the support of many folks, so off they went after a splendid effort. Well, many fans agreed that they made an excellent run of it. In fact, a lot of people really thought that Olivia deserved her second chance as she danced so very well.

Dancing with the Stars – Performances

Suni Lee and Sasha Farber scored 40/40 for their samba to All For You. Melora Hardin and Artem Chigvintsev also managed the same score. Meanwhile, Amanda Kloots and Alan Bersten hit 40/40 and they all beat out Jojo Siwa and Jenna Johnson who managed 39/40. Meanwhile, Iman Shumpert and Daniella Karagach only managed 35/40, while Olivia and Val scored 36/40. In the dance-off against Jojo though, Carrie-Anne went with Jojo rather than Oliva. Plus, Olivia just never had the audience votes her fans hoped for.

Dancing with the Stars contestants Jimmie and Emma were also eliminated. Well, fans commented on Twitter about Olivia. Some critics of Olivia’s mom, Lori Loughlin seemed very glad that she left the show. One of them wrote, “OH, HAPPY DAY!! OLIVIA IS GONE!!” Another one wrote, “Olivia Jade reminds me of Lily Rose Depp. Random…has nothing to do with dancing.”

A lot of Dancing with the Stars fans changed their minds about the controversial appearance of Olivia on the show. After all, many of them believed she danced really well. One of them wrote, “Olivia deserved to stay. I voted!!! So sad she won’t be there next week!”

Another fan noted, “Olivia at the very bottom? Really, voters? Iman should have been voted off early on, and Melora clearly kissed ass to win the judges’ favor, which was perfectly clear when they gave her a perfect 40.”

Be sure to catch up on everything happening with the ABC dance contest right now. Come back here often for more Dancing with the Stars spoilers, news, and updates.