The Bold And The Beautiful (B&B) Spoilers: Psycho Quinn Is Back And In Rare Form 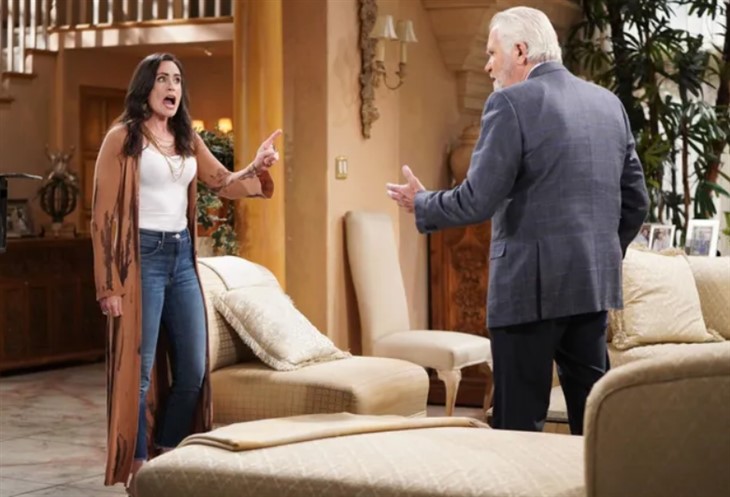 The Bold and The Beautiful (B&B) spoilers and updates reveals Mrs. Forrester seems to have forgotten that she cheated on her husband with Carter. She is now yelling at Eric like a madwoman and making demands It won’t be long before she does something disastrous.

Quinn Forrester (Rena Sofer) came to LA as a trouble maker and now has quickly returned to her formerly devious persona and some might say she is being abusive to her much older husband. Quinn is telling Eric Forrester 4o jump and he is responding with “How high?” Quinn demanded that her husband cut off all contact with Donna Logan Jennifer Gareis) and he complied. Quinn is outraged that her spouse was aroused by Donna but not by her. She laid down the law to Donna and later made things specific as to what she expects from her spouse.

Quinn Forrester (Rena Sofer) has disrespected Eric Forrester (John McCook} in several ways during their marriage. Eric has overlooked her every transgression, including sleeping with Carter Walton (Lawrence Saint-Victor). Carter is still working at Forrester Creations but Quinn made Eric banish Donna from their home and also from her job. Brooke may attempt to get Eric to change his mind but Quinn more than likely come out the winner.

The Bold And The Beautiful Spoilers – No Mercy Is Shown

Eric forgave his wife for having an affair and still has to look at Carter every day at work. Quinn’ however, is showing Donna no mercy. She got right up in her face and threatened her, and Donna was later in tears over the incident. There is no telling what Quinn will do now that she feels backed into a corner. It is disheartening to watch the powerful founder of Forrester being reduced to his wife’s puppet.

B&B Spoilers – Quinn Forrester Is Capable Of Anything

Longtime B&B fans know that Quinn is capable of just about anything. She held Liam Spencer (Scott Clifton) hostage and became his lover while he had amnesia, and she pushed Deacon Sharpe from a cliff. She assisted Shauna Fulton (Denise Richards).

in getting a drunken Ridge Forrester to marry her. Now that she is fighting for her marriage and so enraged at the Logan sisters there is no telling how far the wrath of Quinn will go. Eric could end up being controlled and manipulated by his vindictive spouse.