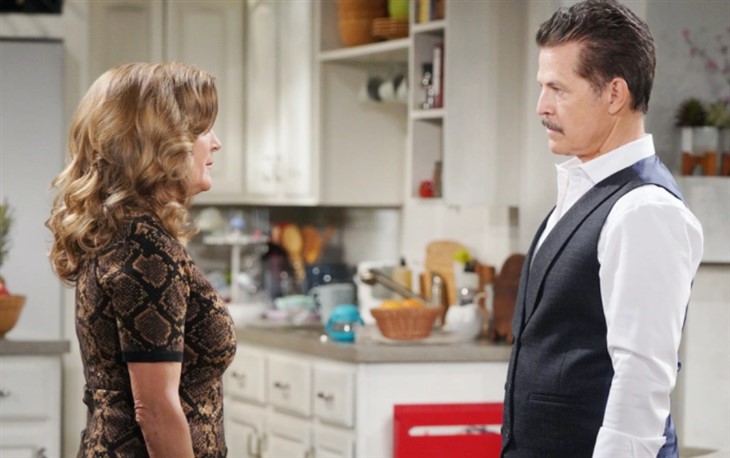 The Bold And The Beautiful Spoilers – What Is Sheila Carter Up To Now?!

Longtime viewers of The Bold and The Beautiful and its sister soap The Young and The Restless will recall that Sheila has several other children, some of which also were given up for adoption but found her, or she found them, but for some reason she has focused in on Finn like he’s her only child – possibly because of the Forrester connection and because he’s the only one who has a successful career! Perhaps she thinks Finn will support her as she gets into her senior years! Sheila had trapped Jack into having lunch with her but he hid when he saw Finn approaching. Now, after Finn leaves Jack comes out of hiding and Sheila starts in on the blackmail!

B&B Spoilers – If Jack Finnegan Doesn’t Pony Up With The Truth, Sheila Carter Will!

Longtime viewers of The Bold and The Beautiful know that Sheila not only worked as a nurse most of her life, she also knows all about faking paternity tests! Viewers of The Bold and The Beautiful know that if someone has access to the lab computers, it’s not all that difficult – even the late Vinny Walker (Joe LoCicero) knew how to do it! It seems that Sheila’s latest plot is very similar to the one she cooked up that Deacon Sharpe (Sean Kanan) – only this time she is seeking to break up Jack and Li’s marriage and get Jack to hook up with her again so Finn will want to be with both of his birth parents!

Jack knows if Li found out the truth, a break up and divorce would be exactly what would happen, although it would not be guaranteed that Finn would want to be with Jack if Sheila was part of the package – and what about baby Hayes Forrester Finnegan (Piper Harriott)? It would still be pretty much an impossibility to get him to herself, Sheila would have to try to prove Steffy unfit or something like that! Sheila presses Jack to pony up with the truth to Li and Finn – and if he doesn’t, she will!

Faked or not, viewers of The Bold and The Beautiful know that Sheila wouldn’t try something like this if she didn’t have the paternity test results! It is certain Jack insisted on them many years ago before giving into Sheila’s blackmail when Finn was conceived! Jack has too much to lose to try to get another paternity test done, because even if he was to get a hair or something from Finn to compare to one of his, since Finn works in the nearest hospital it might be a little bit difficult to keep him from finding out about the paternity test being done!

If Finn were told he would certainly insist on one being done but Jack doesn’t want either him or Li to find out about his affairs with Sheila years ago! That is what would do the damage between him and Li, but with Sheila’s blackmail of threatening to provide proof to them if he doesn’t tell them himself, viewers of The Bold and The Beautiful know she’s got him over a barrel!