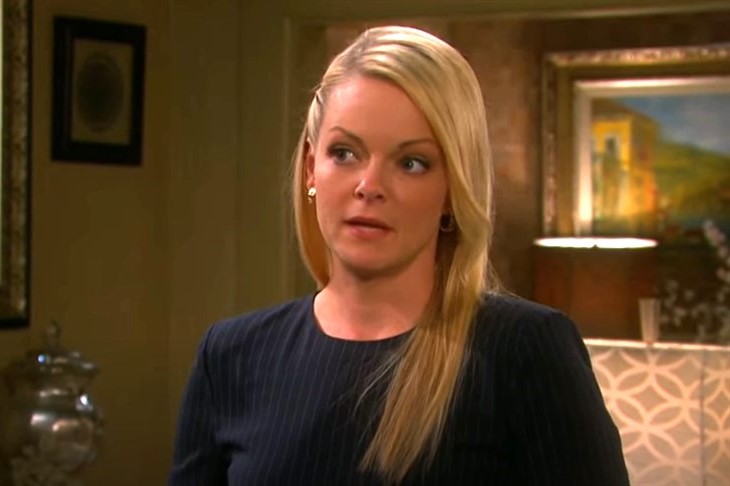 Days of Our Lives (DOOL) spoilers for the week of November 15 reveal that Belle Brady (Martha Madison) considers confronting her mother. Belle has already noticed that something isn’t right about Marlena Evans (Deidre Hall). After Paulina Price (Jackée Harry) and Abe Carver’s (James Reynolds) wedding blows up, Belle might realize the truth.

Days Of Our Lives Spoilers – Those Glowing Eyes

DOOL spoilers reveal that on Halloween, Belle and Shawn Brady (Brandon Beemer) came back to Salem. Belle reunited with Marlena, but it did not go as the lawyer expected. Belle was stunned by Marlena dressing up as the devil, but what disturbed her the most was the glowing eyes. Belle shared the experience with Shawn and then had a nightmare about it.

Even though Belle believed Marlena’s story about John Black (Drake Hogestyn) being out of town on a case, Steve “Patch” Johnson (Stephen Nichols) knew something wasn’t right. Steve didn’t want to alarm Belle, but she could soon start connecting the dots.

Marlena is going to officiate at Abe and Paulina’s wedding. Chanel Dupree (Raven Bowens) initially got upset when Paulina asked Lani Price Grant (Sal Stowers) to be her matron of honor instead of her. Paulina acted fast and claimed that it was due to her wanting Chanel to give her away.

At the time, Chanel agreed, but she will find out that her mother lied. Chanel’s discovery likely has nothing to do with the big secret she’s keeping from Lani and Abe. It probably has to do with something less serious, but Chanel will be upset enough to decide not to attend the wedding.

With “MarDevil” marrying Abe and Paulina, the real secret is about to come out. It is teased that it could happen at the wedding. If Marlena is the one who exposes the secret, everyone will wonder what is wrong with the psychiatrist. This would be the exact opposite of something the real Marlena would do.

Days of Our Lives spoilers reveal that the devil is already holding John hostage in the DiMera crypt. Soon, Susan Banks (Stacy Haiduk) will also be locked in. Meanwhile, Steve is beginning to suspect that something is very wrong with Marlena’s story about John. Steve will search for clues and try to find out the truth about John’s disappearance.

During the week of November 15, Steve will find a clue and Susan tries to escape. Plus, with Marlena talking dirty to Brady Black (Eric Martsolf), it’s only a matter of time before everyone starts realizing the horrible reality – that Marlena is possessed by the devil.

It is teased that during the week of November 15, Belle considers confronting her mother. However, this could be dangerous if she isn’t prepared. Could Belle be the next person that is locked away by the devil? Or will Belle actually be the heroine in this story?