The Bold And The Beautiful Spoilers: Jack Lunches With Sheila, Hides When Finn Shows Up 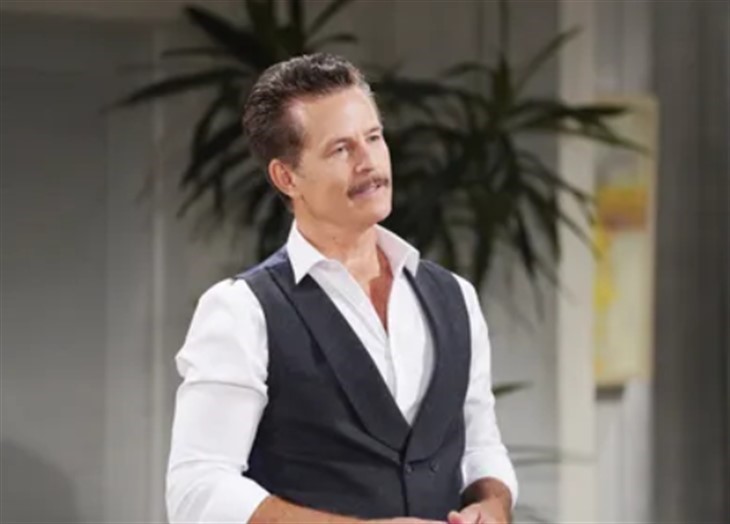 Viewers of The Bold and The Beautiful can guess that Jack is likely still trying to get Sheila to leave town, but when he spots John “Finn” Finnegan (Tanner Novlan) come into the restaurant, he hides! Viewers of The Bold and The Beautiful will recall that Jack was yet another of Sheila’s conquests, and while his wife Li Finnegan (Naomi Matsuda) was in the hospital working as a doctor, Jack was fooling around in supply closets, empty examining rooms, and whatever with naughty Nurse Sheila!

She then became pregnant from their trysts with Finn and Jack’s been paying her off for all these years to keep quiet. Finn would have some very serious questions for his father if he were to see him and Sheila together having lunch – he doesn’t even know that Jack is his birth father, although now he knows Sheila is his birth mother! Sheila of course takes every opportunity to be close to Finn even though he tries to avoid her!

Viewers of The Bold and The Beautiful will recall that Jack was very worried about his son and Steffy Forrester (Jacqueline Macinnes Wood) publicizing their wedding on the internet. Jack knew that Sheila would come slithering out of whatever hole she was hiding in if she saw it, and sure enough she did – somehow getting into the Forrester mansion, introducing himself to Finn as he had excused himself to take a call in an unused room!

Now that Sheila’s crazy plan to get Finn and Hope Spencer (Annika Noelle) to split up from their spouses and get together while Sheila tried to manipulate Deacon Sharpe (Sean Kanan) into a relationship with her has blown up in her face, she needs a new plan. The lunch with Jack is bound to be part of it, because viewers of The Bold and The Beautiful know he’d never set it up himself unless it was to get her out of town! But since Finn shows up, the lunch is more than likely something Sheila has planned! Jack hides when he sees him coming!

Viewers of The Bold and The Beautiful know that Jack doesn’t want Finn to know that he knows Sheila from the past – other than that he knows she was Finn’s birth mother and gave him away. Finn knows it was a private adoption but doesn’t know all the details – even his adoptive mother Li doesn’t know everything, obviously. Jack heard about Sheila and Deacon being spotted having lunch together by Finn and Hope, and he sure doesn’t want Sheila to pull the same thing on him, grabbing him and forcing kisses on him as Finn approaches!

Jack smells a set up because it cannot be just a coincidence! Jack knows though he cannot stop Sheila from trying to get Finn’s attention and telling him some made-up story that he just missed his dad and trying to fabricate a relationship between him and her! Viewers of The Bold and The Beautiful know that Finn may not believe such a tale, but Jack simply cannot chance it! He has to find some way to keep Sheila’s mouth shut!