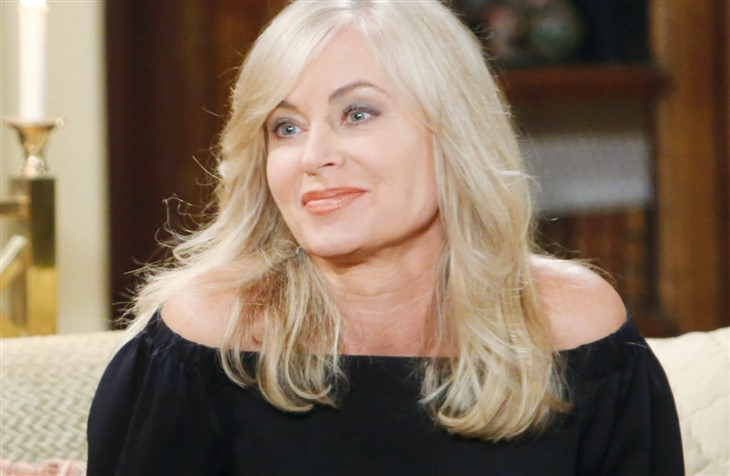 Days Of Our Lives (DOOL) spoilers and updates tease that Eileen Davidson is returning to Salem as Kristen DiMera. Given that she’s reprising the role she debuted in, what does her comeback mean for Stacy Haiduk?

Haiduk is currently playing the role of Kristen. If Davidson is returning to the soap to reprise her role, does it mean Haiduk is leaving the daytime show? Fortunately not. Both actresses will play the same character at the same time in the coming episodes.

Davidson will only make a special appearance and that means she won’t be staying in Salem for long. So, fans of Haiduk can take a huge sigh of relief knowing that she’s not going anywhere.

Days Of Our Lives Spoilers: Gwen Bound And Determined Not To Lose Jack And Xander

Davidson will appear on the soap for a few episodes. Marlena Evans (Deidre Hall), who has been possessed by the devil, will use Davidson’s Kristen to torment John Black (Drake Hogestyn) with some diabolic delusions.

The devil will work overtime to destroy John and Marlena’s love story. Susan Banks (Stacy Haiduk) will try to help John get out of the DiMera Crypt. Unfortunately, their escape plan won’t work. Susan will manage to get out but John won’t.

As for Kristen (Stacey Haiduk), she’ll call Gwen Rizczech (Emily O’Brien) and ask for help. She’ll convince her to do what she wants by telling her that Sarah Horton (last played by Linsey Godfrey) is trapped on a remote island.

Kristen says she’ll keep her mouth shut if she helps her out. Gwen won’t have any choice but to cooperate since she doesn’t want Sarah and Xander Cook Kiriakis (Paul Telfer) to be reunited.

Gwen wants Sarah to stay wherever she is right now, far from her and Xander. However, the latter is doing the opposite. He’ll ask Maggie Kiriakis (Suzanne Rogers) for help in finding Sarah. He still believes that Sarah is with Rex Brady (Kyle Lowder). So, he’ll be shocked when he finds out that they’re not together at all.

Days Of Our Lives Spoilers: Sami Calls EJ, Will He Brag About Bedding Nicole?https://t.co/AphleSGjhZ

Belle Brady (Martha Madison) and Shawn Brady (Brandon Beemer) will find something unexpected in the townhouse living room that will tell them that something’s up. Whatever it is that they find, it’ll have something to do with Marlena’s devilish plans for Salem.