Days Of Our Lives Spoilers: Philip Wants Revenge On The Ones Who Wronged Him 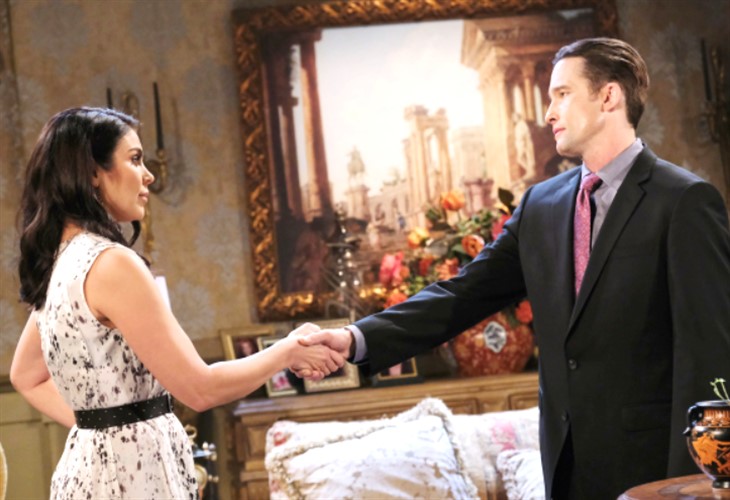 Days of Our Lives (DOOL) spoilers and updates Philip Kiriakis (Jay Kenneth Johnson) is in a bad place. Philip had been running his family company Titan. Philip has been fired from his position by his father Victor Kiriakis (John Aniston). Philip has been in a relationship with Chloe Lane (Nadia Bjorlin). Philip believes that Chloe has not been faithful to him. Philip had planted a tree as a romantic gesture to Chloe to show her that he loved her. Philip is furious with Chloe and has pulled the tree out of the ground. Philip is determined to make the ones that wronged him pay.

Philip believes that Chloe has cheated on him with Brady Black (Eric Martsolf). Philip overheard Chloe and Brady talk about having sex on the conference table at their company Basic Black. Philip does not know that they were talking about the fact that Rafe Hernandez (Galen Gering) and Nicole Walker (Arianne Zucker) had been the ones who had the intimated encounter. Philip believes that Brady wants to take Chloe away from him. Philip is not entirely wrong because Brady is interested in Chloe. Philip has wanted to go after Brady over Chloe but did not because he was trying to trust Chloe who has not cheated on him. Philip may try to do something drastic to Chloe and Brady.

Days Of Our Lives Spoilers: Gwen Bound And Determined Not To Lose Jack And Xander

Philip had been dealing with Gabi Hernandez (Camila Banus) and Jake DiMera (Brandon Barash) over their attempt to take over Titan. Philip decided to turn to Ava Vitali (Tamara Braun) to help him to take down Gabi and Jake. Ava agreed to help Philip in exchange for being able to take over Gabi’s company GabiChic. Philip agreed to Ava’s terms. Philip and Ava’s plan went badly because Jake was involved in an incident which resulted in Abe Carver (James Reynolds) getting shot by Carmine Merlino (Richie Stephens). Ava has been a part of the mafia and Jake worked for her family.

Ava knew that Jake and Carmine had been involved in a wrongful death. Ava gave Philip the information which he used to try to blackmail Gabi. Philip told Gabi that she could give GabiChic to Ava or she would lose Jake. Philip has been trying to manage the situation after Abe was shot. Victor was not impressed with the way that Philip had handled the situation and decided that he would fire Philip. Philip told Victor that he hopes that Titan is destroyed. Philip may decide that he wants to find a way to make more trouble for Gabi and Jake.

Philip may believe that Ava has been the source of his trouble. Ava had wanted to go after Gabi and Jake because they had had tried to sabotage her relationship with Rafe. Philip had gotten involved with the mob before which had caused trouble for him in the past when he was working at Titan. Philip may believe that Ava has cost him his position at Titan because she brought the mob back into his life. Philip may decide to hurt Ava in some way.

DOOL Spoilers – Philip Kiriakis Takes His Vengeance Out On Others

Days of our Lives Philip is determined to take down the ones that have hurt him. Philip believes that he has lost Chloe to Brady. Will Philip be the reason that Brady and Chloe really get together because he goes after them? Philip has decided that he does not care about Titan. Will Philip decide to try to sabotage Titan in some way? Philip is angry with Gabi, Jake, and Ava because they brought trouble into his life. Will Philip try to find a way to get payback from Gabi, Jake, and Ava in some way? Be sure to catch up on everything happening with DOOL right now. Come back here often for Days of Our Lives spoilers, news, and updates.