The Bold And The Beautiful (B&B) Spoilers: Wedding Bells Ringing For Zende And Paris 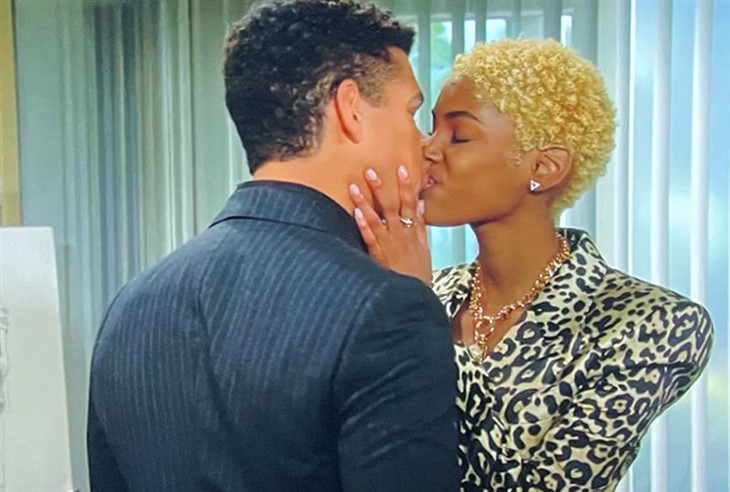 The Bold and the Beautiful spoilers indicate that wedding bells may be ringing for a young couple.

Zende Dominguez (Delon de Metz) and Paris Buckingham (Diamond White) have been dating for over a year. It appears they’re ready to take the next step in their relationship.

Upcoming spoilers suggest Zende plans a surprise for Paris, and speculation is it’s a marriage proposal.

Previews for the coming week have Zende seeking Quinn Fuller’s (Rena Sofer) help. Zende needs a special gift for Paris and enlists the jewelry designer in creating an elegant surprise.

However, Zende’s gift won’t be just any type of jewelry. It’ll be an engagement ring.

Zende and Paris’ relationship has been a central focus recently. The young lovers are as happy as can be, or so they seem. With Zende and Paris in a good place in their relationship, he’s ready to make their union permanent.

Zende’s plan to make Paris his wife had a big hitch, and that’s his cousin Thomas Forrester (Matthew Atkinson). Recently, Paris become Thomas’ roommate, and the storyline’s playing out as fans expected.

Thomas has become infatuated with his new friend. After Douglas Forrester’s (Henry Joseph Samiri) inquiry about his dad’s new living arrangement, Thomas may be thinking about a future with Paris.

Thomas’ wants to find love and give Douglas a family. He thought he’d have that with Hope Logan (Annika Noelle), but has accepted they’ll never be and moved on.

Paris seems to be the woman he wants, even though she’s already taken. Although he’s trying to deny his urges, he can’t resist.

Thomas lays his heart on the line when he plans a romantic dinner for Paris. Of course she’s taken aback by the gesture, but will it be enough to win her heart?

The Bold And The Beautiful Spoilers – Will Paris Buckingham Accept Zende Forrester’s Proposal?

Thomas’ romance meal isn’t the only surprise in store for Paris. When Zende pops the question, Paris will be stunned and confused.

Although she’ll be quick to accept Zende’s proposal, it doesn’t mean the couple will make it down the aisle. Paris may be committed to Zende, yet as seen in the past, she’s been attracted to other men.

She had a crush on Dr. John “Finn” Finnegan (Tanner Novlan) when she was his and Steffy Forrester’s (Jacqueline MacInnes Wood) houseguest. Although Paris fantasized about the handsome doctor, she never acted on her feelings.

But will the same scenario occur with her and Thomas?

Thomas’ declaration will touch Paris, and it may also have her questioning her true feelings. Although Paris would love to be Zende’s wife, she’s also curious what a future with Thomas would look like.

Paris has a lot of thinking to do before she makes a decision. But no matter who she chooses, one man will be left broken-hearted.