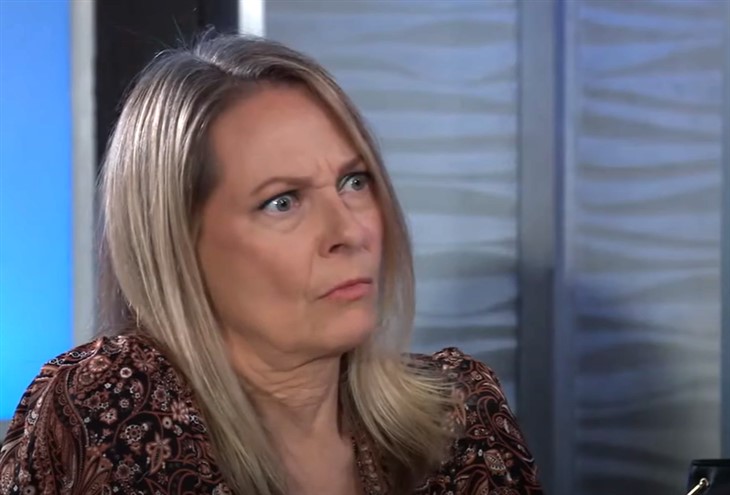 General Hospital (GH) spoilers tease that no good deed goes unpunished and Brook Lynn Quartermaine (Amanda Setton) could be about to find this out the hard way. She has been pretending to be the mom of baby Bailey who is actually Louise, the daughter of Maxie Jones (Kirsten Storms). Why is BLQ of all people doing Maxie a favor? These two were sworn enemies at one time, but fate and circumstance brought them together in an immensely soaptastic manner.

General Hospital Spoilers – Gladys Corbin Is Smarter Than She Looks

To make a long story short, BLQ was pretending to be pregnant and Maxie really was pregnant. Maxie needed to protect her baby from Peter August (Wes Ramsey), and BLQ needed a baby to pass off as hers. Their solution was brilliant but has started to crumble around the edges the longer the deception goes on.

Sneaky Gladys Corbin (Bonnie Burroughs) has never met a con job she doesn’t like. She taped BLQ saying that Valentine Cassadine (James Patrick Stuart) wasn’t really her baby daddy and in turn BLQ had no choice but to hand over the keys to the kingdom, in this case her credit card.

Gladys has been blowing through BLQ’s money like a sailor on shore leave. In order to stop the blackmail and keep her fortune intact, BLQ and Maxie came up with a plan—the “real” baby daddy who is also a fake.

GH spoilers – Who is Kip Morris?

Fake Baby Daddy Kip Morris (Artie O’Daly) once did minor acting work for Nina Reeves (Cynthia Watros) and Maxie thinks he’ll be brilliant as BLQ’s baby daddy. The women tell him what they need from him but he makes the mistake of trying to kiss BLQ—he’s lucky all his bones are intact.

The plan is set in motion when BLQ sees Gladys at the Metro Court bar and shady Gladys tries to squeeze BLQ for more. Kip walks over, he’s introduced as Paulie and grabs Brook Lynn’s credit card out of Gladys’ hand. BLQ informs Gladys that Paulie isn’t putting up with her ish. Paulie calls BLQ his girl and baby mama. To punctuate his bad guy-ness he opens his jacket to reveal a gun. Smarmy Gladys keeps sassing him until Paulie smacks his hand down on the bar to make the point she best back off.

Next BLQ orders Gladys to delete her incriminating recording. Satisfied that there are no dupes, Brook Lynn tells Gladys they’ll catch up at work tomorrow. At the hospital Kip wants medical attention for his hand and Maxie gives him more money while Austin Gatlin-Holt (Roger Howarth) spies on them.

Explosive show spoilers reveal that in the coming days Gladys may discover that Paulie is not who he says he is, putting her right back in the catbird seat. What might she demand of BLQ this time? Knowing Gladys she will go for all the marbles and demand controlling interest in Deception. Can you imagine Deception under Gladys’ direction? We can and can’t wait to see what wackiness she brings!