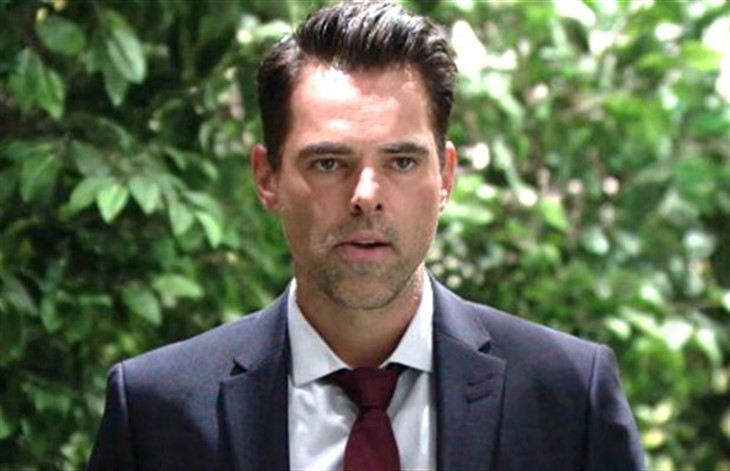 The Young And The Restless Spoilers – Billy Abbott Didn’t Accidentally Hit “Send” On That Email!

Viewers of The Young and The Restless will recall from recent episodes of The Young and The Restless that Billy, and Lily Winters (Christel Khalil) were blindsided when they realized an exposé on Ashland Locke (Richard Burgi) that they had put the kibosh on publishing had been not only published, but viral all over the net! Billy had asked the reporter who broke the story why she did, and she had replied that Billy sent her an email to do it and he didn’t accidentally hit “send” on an email he’d created! The exposé in question had been a dirty tabloid type slam against Billy’s ex-wife Victoria Newman’s (Amelia Heinle) new husband and his crooked acquisition of his “mentor” Camilla Rhodes’ (uncast character) money and two television stations as a younger man.

Billy had actually written such an article but couldn’t figure out how it got online – he only wanted leverage to get the Newman family and Newman Media to back off. Now Billy will have to deal with questions such as if anyone will believe that he didn’t intend to publish the article, will this cause more trouble with the Newmans, and other important questions. Jason Thompson gives his take on those important questions and others, such as what Billy and Lily’s combo couple name should be!

Y&R Spoilers – How Much Of Billy Abbott’s Expose Involves Jealousy Or Rivalry?

One important questions viewers of The Young and The Restless may have is how much of his digging into Locke’s past is really honest journalism, and how much might be Billy’s jealousy of his ex-wife moving on, or his long running rivalry with Adam and Victor Newman (Mark Grossman, Eric Braeden) which longtime viewers of The Young and The Restless will recall. To that question, Jason says he thinks that Billy is well aware of all the facets.

He feels a responsibility towards his mother, Jill Abbott (Jess Walton) because she was the one who created ChancComm and brought his current love, Lily Winters in so they could run it together. Billy has really fallen for Lily; she is always honest with him and accepts him for who he is although she doesn’t always like everything he does, and calls him out on it!

However, this rivalry with the Newmans is based on his disdain of them- Victor constantly puts him on the defensive, and he’ll never trust Adam. Billy has integrity when it comes to journalism, and he continues to fight for it. But sometimes lines get blurred and he has no problem playing in the grey zone, but since Locke could endanger both Victoria, his ex-wife and the children they share custody of, this makes his opinions of Locke more personal.

Y&R Spoilers – How Big Is ChancComm?

Another question posed to The Young and The Restless actor Jason Thompson is exactly how big ChancComm is supposed to be. Jason actually doesn’t know but the way it’s played, it seems like a very big company. Budget cuts and covid restrictions of course have made new sets different than they once were, and many less extras are used in scenes. Jason says that ChancComm advertises itself as world level – and the big boys in the business world are competing for it. Reputations are on the line frequently in big business in real life, as are real life corporate takeovers and revenge, cliques, and personal feelings involved.

As far as Billy’s personal feelings in this current storyline on The Young and The Restless, he wants to protect Lily and not see her name dragged through the mud even though Billy’s reputation cannot help but be tarnished. Another question posed to Jason in the interview is how this could have happened? Is the company so big that Billy and Lily aren’t in touch with the day to day operations?

Jason doesn’t think so – Billy had a reporter start writing this exposé on Locke but hadn’t given the go-ahead to publish it. Billy was going to use the article as a threat, as leverage, and although Ashland and Victoria knew of the article, he’d promised not to publish it – but, there it was all over the net! He wants to keep ChancComm from going down and feels responsible to his employees and is fighting tooth and nail to keep the Newmans from acquiring the company!

The Young And The Restless Spoilers – Will Billy Abbott Be Believed?

Longtime viewers of The Young and The Restless will recall that Victor has long despised Billy, and Billy has long despised the Newmans in general but Adam in particular! Given that fraught history between Billy and the two Newman men on The Young and The Restless, will his side of the story even be believed? Jason notes that Billy doesn’t feel like a criminal in any of this. The truth is that he wants to protect his children with Victoria, and Victoria herself if possible. Like her brother Nick Newman (Joshua Morrow) Billy has smelled a rat in Ashland from the start, and Billy is protective over those he cares about.

Also factoring into Billy’s long time hatred of Adam is his blaming Adam for the death of his daughter with Chloe Mitchell, (Elizabeth Hendrickson) Delia Abbott (Sophie Pollono). Jason says that for Billy, the heartbreak of Delia’s death and the memories of that night are always present, as well as the aftermath. Billy is actually no saint himself, but it’s easy for him to classify the Newmans, and Adam in particular, as criminals because of Delia’s death. The Abbotts and The Newmans also go about business dealings in different ways and their differences cause their business worlds to collide constantly.

They get along once in a while, as was evidenced by Jack Abbott’s (Peter Bergman) concern for Victor Newman a few years ago when he found him collapsing in Society. This was because Adam had switched his medicine! Finally, an important question was posed to Jason although not as important as the previous questions about Billy. What should their combo couple name be for Billy and Lily? He says they’ve actually gone back on forth on that on set, finding “Bil-ily” a bit difficult to pronounce, and “Lib-illy”was the other – possibly sounding too much like the word “libel” or perhaps “liability”!