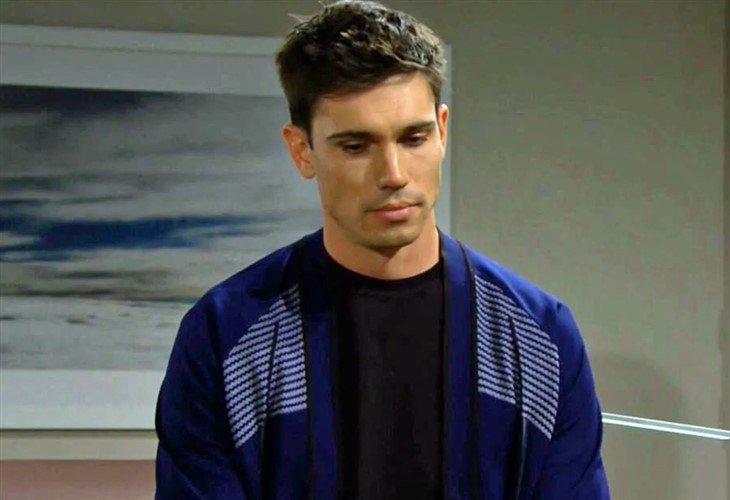 The Bold and the Beautiful (B&B) spoilers and updates tease Dr. John Finnegan (Tanner Novlan) is going to have deal with another shocking truth. Finn has known that he was adopted by his parents Jack Finnegan (Ted King) and Dr. Li Finnegan (Naomi Matsuda). Finn has been able to find out that his biological mother is Sheila Carter (Kimberlin Brown). Finn wants to get to know Sheila but she has a complex and troubled past with his wife Steffy Forrester (Jacqueline MacInnes Wood).

The Bold and the Beautiful Spoilers – Dr. John Finnegan Draws Strength from his Wife Steffy Forrester

Finn has found that Steffy has been able to help him to deal with finding out about Sheila. Seffy has been worried that Sheila will hurt Finn and their child Hayes Finnegan (Piper Harriot). Steffy has told Finn to stay away from Sheila. Finn has been trying to do what Steffy wants him to do in regards to Sheila. Steffy will be upset to find out that Jack is really Finn’s father. Finn has believed that Jack was always honest with him. Steffy will want to help Finn to deal with the truth. Finn knows that he can rely on Steffy to help him.

Li and Finn have a close mother and son relationship. Li has been devastated to find out that Jack had an affair with Sheila. Li is trying to accept that Finn is Jack’s son with Sheila. Li may put her own feelings aside to be able to help Finn to cope with finding out the truth. Finn could turn to Li to help him to sort out his feelings for Jack. Finn may need to spend time with Sheila to get her side of the story. Finn will want to know more about the time that Sheila and Jack were together from her. Finn may find that he will need both of his mothers.

The Bold and the Beautiful Spoilers – Dr. John Finnegan Gets Advice from Hope Spencer and Paris Buckingham

Finn has found that Hope Spencer (Annika Noelle) and Paris Buckingham (Diamond White) have been able to help him with his problems in the past. Paris and Hope have complicated relationships with their fathers. Paris has had to deal with the fact that her father Dr. Reese Buckingham (Wayne Brady) was in jail for deceiving Hope and Steffy over Hope’s daughter Beth Spencer (Madeline Valdez and River Davison). Hope has had her own issues with her father Deacon Sharpe (Sean Kanan). Hope has been determined to give Deacon a second chance to be in her life. Hope and Paris could help Finn to find a way to forgive Jack because they have had to deal problems with their fathers.

The Bold and the Beautiful Finn will have to find a way to deal with the truth that Jack is his biological father. Jack and Finn have shared a strong father and son relationship. Finn loves Jack and has admired him his whole life. Jack will have to work to get Finn to trust him again after Finn learns the truth. Can Jack win back Finn’s trust? Who will help Finn to find a way to accept the truth about Jack?

Will Finn get the help he needs from Steffy? Will he need Li and Sheila to help him to find a way to understand Jack better? Can Hope and Paris help Finn to deal with the new found information on Jack and be able to help Finn accept that Jack still loves him even though he has been keeping him from knowing that he was his father all his life? Be sure to catch up on everything happening with B&B right now. Come back here often for The Bold and the Beautiful spoilers, news, and updates.