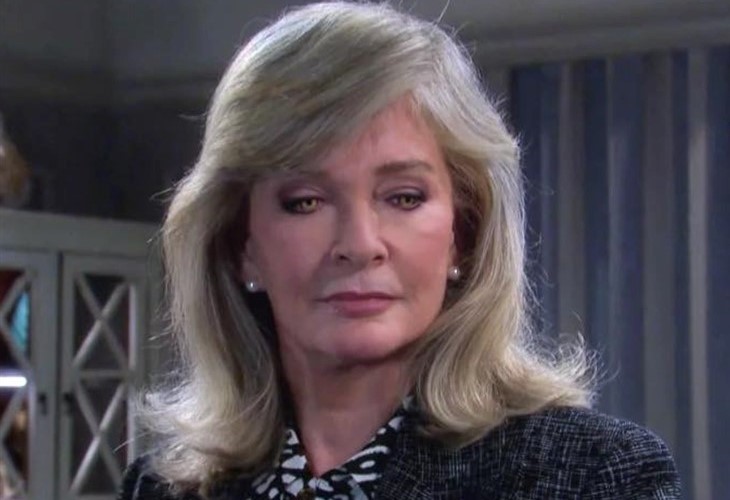 Days of Our Lives (DOOL) spoilers reveal that Susan Banks (Stacy Haiduk) is ordered to murder John Black (Drake Hogestyn). If Susan doesn’t, then the devil will kill Susan’s son, EJ DiMera (Dan Feuerriegel). This puts the psychic in a tough position and she comes up with a drastic plan. Susan could make a huge sacrifice to save EJ as well as “Jarlena”.

DOOL spoilers reveal that during the week of November 22, Marlena Evans (Deidre Hall) decides that John and Susan must die. Due to Susan’s escape attempt, “MarDevil” orders Susan to be the one to end John’s life. Of course, Susan will refuse to take anyone’s life. So, the devil threatens someone close to Susan in order to force her to comply.

Days Of Our Lives (DOOL) Spoilers: Rafe Keeps The Peace And His Secret

Marlena tells Susan that if she doesn’t kill John as instructed, then EJ will die and go straight to hell. This puts Susan in a difficult position as EJ is her son, but she also adores Marlena and can’t take John’s life. Susan tries to come up with a way to defeat the devil and save everyone. Unfortunately, Susan isn’t as strong as the devil and her original plan fails. Then, Susan comes up with plan “B” but that also bombs.

Days of Our Lives spoilers from the November 29 issue of Soap Opera Digest teased that Susan comes up with a third plan. Actress Stacy Haiduk explained to the magazine that Susan does something unexpected.

“Susan took what the devil had to say into her own hands and came up with a plan C. She ended up doing something the devil didn’t ask and is hoping it will work.”

We know that John and Susan are both hospitalized during the week of November 29. Plus, Marlena ends up going missing. So, could Susan’s sacrifice be inviting the devil into her own body? Or perhaps Susan nearly kills herself in order to save “Jarlena?”

As for Marlena’s disappearance, it is teased that she reunites with Sami DiMera (Alison Sweeney). However, is it the real Marlena or could the devil be trying to possess Sami next? Perhaps the devil is responsible for Sami’s abduction. If so, then that means Marlena and Sami will be imprisoned together. If that’s true, then who will the devil possess next? We know this story won’t be over until Christmas, so who does Satan possess next?