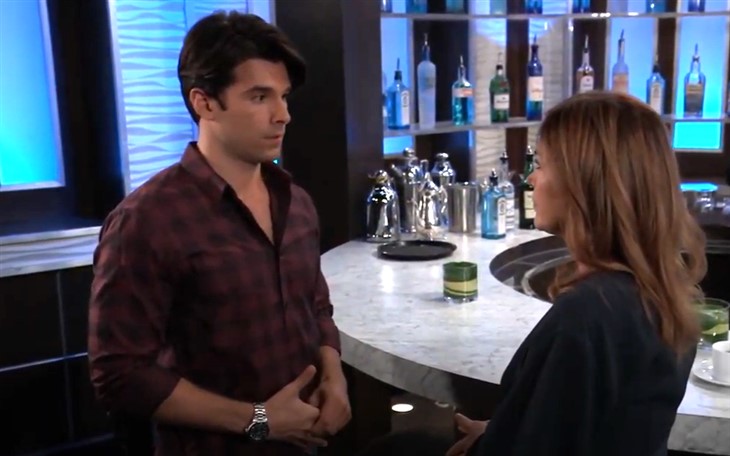 General Hospital Spoilers tease that Harrison Chase’s (Josh Swickard) parents have been gone from Port Charles in recent weeks. Long-time residents of Port Charles when Jackie Templeton (Kim Delaney) returned to town last year to help Lulu Falconeri (Emme Rylan) put away criminal mobster Cyrus Renault (Jeff Kober). Jackie had become a famous journalist in her years away from Port Charles, but the real shock was that she was also Chases’ mother! For awhile it looked as though Jackie might reconcile with Robert Scorpio (Tristan Rogers) but that didn’t seem to really go anywhere.

General Hospital Spoilers – Dr. Hamilton Finn Had A Past With Jackie Templeton!

One person who wasn’t exactly pleased to see Jackie was Chase’s older brother, Dr. Hamilton Finn. As viewers know, Finn had slept with Jackie the night before she married his father Gregory Chase (Gregory Harrison). Neither Finn nor Jackie knew for sure if Chase was actually Finn’s brother, or his son! So when Chase was poisoned by Peter August (Wes Ramsey), Finn worked overtime to save Chase, who he believed was his son after a DNA test was done. But that wasn’t quite the truth, thanks to a certain drug pushing gangster!

Wanting to get revenge on Jackie, Cyrus Renault (Jeff Kober) changed the DNA results. The truth was that Chase was Finn’s brother, as Chase had believed his whole life. Chase was saved by an antidote Finn created, and that was the last viewers saw of either Jackie or Gregory. The whole time Jackie had been in Port Charles, she and Gregory had been estranged and Jackie was planning on filing for divorce!

Asa Finn worked day and night to save their son, it seemed as though that Jackie and Gregory were getting closer. Perhaps the fear of losing their child brought them back together. It shouldn’t be long before Chase hears from either Jackie or Gregory and it just may be possible that they have reconciled during their time away from Port Charles! Both Chase and Finn should be happy to hear some good news for once and maybe their family can finally heal now that all the secrets between them are out in the open!

Where are Gregory and Jackie? Did watching Chase almost die bring them back together? Have they decided to stay married? Anything can happen in Port Charles so stay tuned to General Hospital airing weekdays on ABC. And don’t forget to check back right here regularly for all your General Hospital news, information and spoilers!