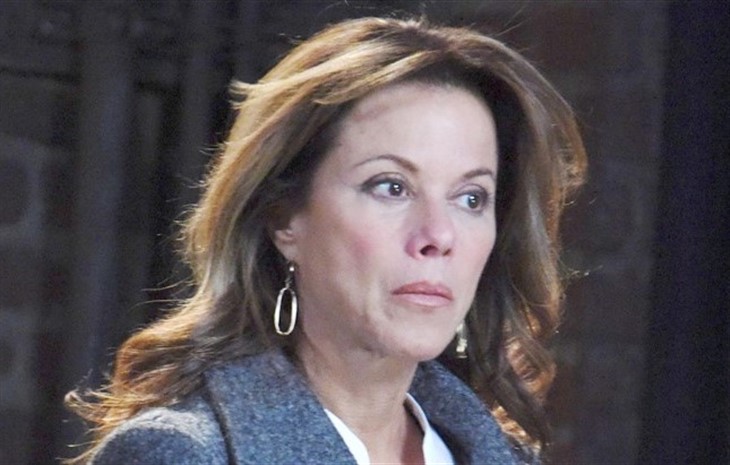 General Hospital (GH) spoilers tease Alexis Davis (Nancy Lee Grahn) has just gotten a second chance, but what will she do with it? As viewers know, Alexis was disbarred last year after lying under oath that she and Dr. Neil Byrne (Joe Flannigan) were not romantically involved even though they were. Neil was Alexis’ therapist but they ended their professional relationship before they began a personal one. Unfortunately, the Ethics Committee stated that a therapist and a patient had to wait two years after to begin a relationship and they did not wait.

After Alexis was disbarred and Neil lost his license, they decided to pursue a romantic relationship after all. All was well until Neil died of a drug overdose shortly after making love to Alexis. Alexis, an alcoholic, fell off the wagon. During this time, she had a one-night stand with the very married Ned Quartermaine (Wally Kurth). But she didn’t hit rock bottom until she plunged a syringe full of lidocaine into Dante Falconeri’s (Dominic Zomprogna) chest. Alexis mistakenly thought that Franco Baldwin (Roger Howarth( was attacking her daughter, Sam McCall (Kelly Monaco). Dante stepped in between Alexis and Franco at the last moment.

Pleading guilty to attempted murder, Alexis went to jail and planned to serve out her time. But her nephew Nikolas Cassadine (Marcus Coloma) was able to convince the Governor to give Alexis a pardon. Now Alexis is at a crossroads. She can no longer practice law and everywhere she looks there is the temptation to drink again. Alexis needs a purpose. Could Shawn Butler (Sean Blakemore) have a solution.

Shawn, also recently out of prison, is starting a non-profit organization. He asked Alexis to run it once before, but she was still in prison at the time. But now that she is free, could that be just the thing Alexis needs to find purpose once again. Alexis is smart and compassionate, but she may not know all there is to know about running an organization like that. If she does take the job, there may be some college courses in Alexis’ future!

Is Alexis ready to start a new career? Or should she just enjoy her freedom for the time being? Will she take Shawn up on his offer? Anything can happen in Port Charles so stay tuned to General Hospital airing weekdays on ABC. And don’t forget to check back right here regularly for all your General Hospital news, information and spoilers!