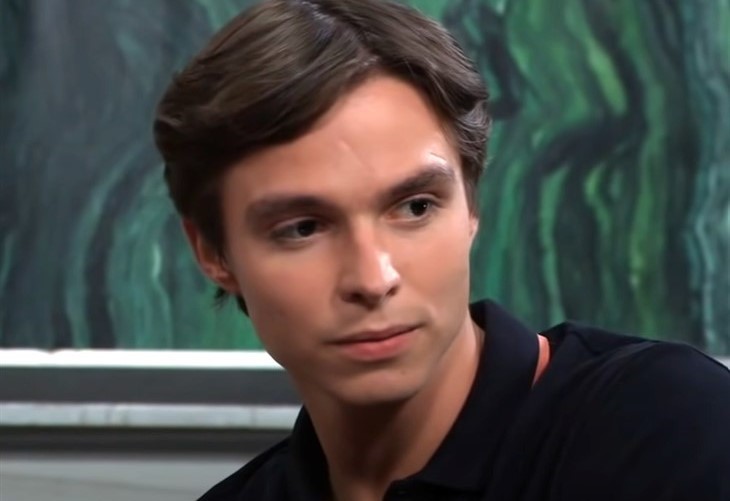 General Hospital Spoilers tease when Spencer Cassadine (Nicholas Chavez) first revealed himself in Port Charles, he wasn’t alone. During his time in boarding school, Spencer met Esme Prince (Avery Kristen Pohl) and the two of them became a couple. Esme seems to have latched on to Spencer and helped him in his plot to stalk Ava Jerome (Maura West) in the hopes that they could scare Ava enough to divorce Spencer’s father, Nikolas Cassadine (Marcus Coloma). Esme seemed to revel in the chaos she caused, as evidenced by some of her actions without Spencer’s knowledge!

Hoping to give Spencer an alibi for Ava’s stalking, Esme set Ava’s car on fire herself. She also left a calling card behind. She left Kiki Jerome’s (Hayley Erin) employee badge from the hospital behind as a calling card. Kiki had been murdered by Ryan Chamberlain (Jon Lindstrom) so leaving Kiki’s badge behind was quite a cruel thing to do. Once Spencer was caught, he downplayed Esme’s involvement, so only Spencer was arrested.

Spencer met Trina Robinson (Sydney Mikayla) not long after he arrived in Port Charles. Trina is the exact opposite of Esme. She’s not impressed by Spencer’s money or title. And she talks to Spencer like a real person, and isn’t afraid to call Spencer on his actions. Spencer has found himself drawn to Trina, and Esme has certainly taken notice. She tried to lock Trina in the back room at the Jerome Gallery, hoping that Trina would miss her big moment at the exhibit she orchestrated.

Esme has been pushing for Spencer to reconcile with his father. She wants Spencer to regain his stature and money that comes with being a Cassadine. Trina, for her part, has advised Spencer to be his own man and to make his own money. Spencer may eventually see the light and dump Esme, but if that happens, look for Esme to strike back. Esme still has an unknown connection to Ryan, and may even be his daughter. If Esme even has a fraction of Ryan’s murderous tendencies, then Trina should be very careful.

Will Spencer stay with Esme? Or will he dump her for Trina? Should Trina be concerned about Esme’s more dangerous tendencies? Anything can happen in Port Charles so stay tuned to General Hospital airing weekdays on ABC. And don’t forget to check back right here regularly for all your General Hospital news, information and spoilers!