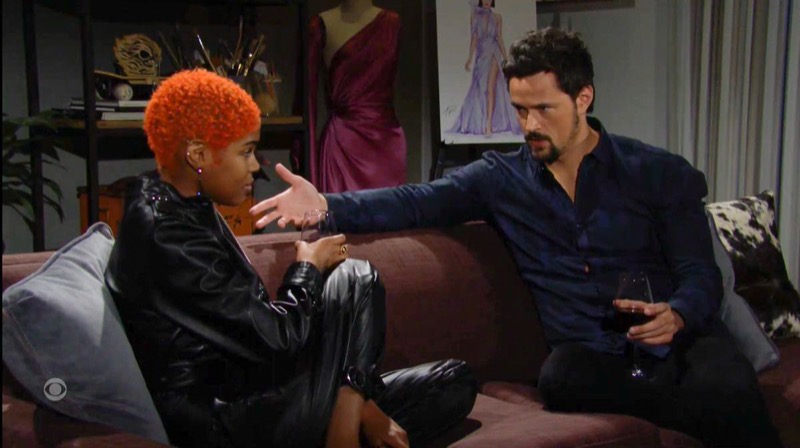 The above is not the roommate’s dinner that Zende Forrester Dominguez (Delon de Metz) envisioned. His talk with Carter Walton (Lawrence Saint-Victor) seemed to foreshadow a coming cousin’s conflict.

Thomas told Paris that he was falling for her and suggested that he was an option if she was not solid with Zende. Her words and demeanor appeared to indicate that Pende is and will remain her preferred pairing.

It makes sense that Zende trusts Thomas at this point in the plot. He, like the other members of the Forrester family, have witnessed Atkinson’s character pursue a redemption course.

Zende trusts Paris and has deepened his relationship with her in recent months. So, de Metz’ character has no reason to believe that she would be open to any other man, including Thomas.

Bold And The Beautiful Spoilers – Will Thomas Forrester Accept Decision?

The easy answer is yes. However, Paris could realize Zende’s insecurities once he learns that Thomas made a play for his girlfriend.

Hearing that Paris is committed to Zende was disappointing. But Thomas will still be in proximity at work regularly. For the time being, they are also sharing an apartment.

Even if Paris accepts Zende’s offer to move out of the apartment, Thomas will remain a known option. That is an important development.

Bold And The Beautiful Spoilers – Paris Buckingham Is Maturing

Paris seemed like a just-graduated college student when she arrived in Los Angeles, California. Not much real-time has passed. But space between then and now exists in B&B’s world.

Carter’s recent conversation with his ex-fiancee’s sister was noteworthy. He appears inclined to pursue romance with Katie Logan (Heather Tom) but did offer a friendly ear to Paris. So, White’s character can walk through that open door if she needs advice about Zende, Thomas, or both.

Zende is Paris’ current, clear love interest. But she appears to be fond of Thomas. So, if any friction arises, he could represent the rebound on B&B.