Days Of Our Lives Spoilers: MarDevil Pulls Ben And Ciara Into Her Web Of Lies 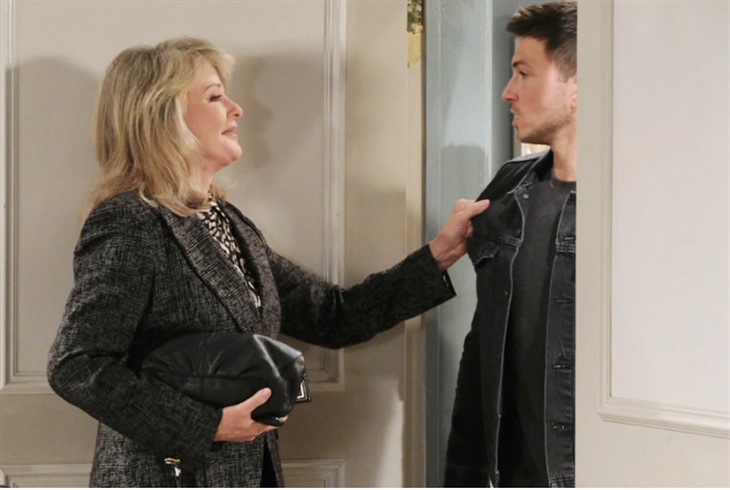 Days of Our Lives (DOOL) spoilers tease that Marlena Evans, (Deidre Hall) as MarDevil, will pull Ben and Ciara Weston (Robert Scott Wilson, Victoria Konefal) into her web of lies in an upcoming episode of Days of Our Lives!

Days Of Our Lives Spoilers – Satan Wants A Son

Days of Our Lives viewers will recall that satan wanted a son – and used Marlena to make sure he got one! Days of Our Lives viewers will remember that Ben had been very nervous about fathering a child with Ciara – he was so afraid that his evil genes would pass onto their children. He even had a nightmare, where a tweenage son of their strangled a future babysitter to death with a necktie! Ciara tried to convince him that it couldn’t happen – apparently being a firm believer in nurture versus nature.

Ben’s upbringing was horrible, and he could use his bad experiences to make sure that no child of his would be raised the same way! It could be looked at as a learning experience! After all, just because his own nephew, the child of his late sister Jordan Ridgeway (Chrishell Stause) and Christian Maddox (Brock Kelly) was born to two people who could be considered evil, baby David Ridgeway (Kyler and Caleb Ends) really didn’t seem to be the spawn of satan when Rafe Hernandez (Galen Gering) was taking care of him – all the evil acts were committed by his parents!

Days of Our Lives viewers will recall that Marlena, as MarDevil, was the one who convinced Ben to try for a baby, and had reassured him that his “evil genes” would not pass on to his children. This was after he had talked to Tripp Johnson (Lucas Adams) who did verify that sometimes dispositions towards criminal behavior could be inherited genetically. But satan wanted a son – and he wanted to have that son through Ben and Ciara, so the night the baby was conceived, satan blew into the room and overshadowed Ciara!

More recently, Days of Our Lives viewers will remember that Susan Banks (Stacy Haiduk) had a premonition about evil affecting Ciara and Ben and their baby, and came all the way from Memphis to warn them – which put her in danger from satan, and he turned her into a black cat twice and imprisoned her with John Black (Drake Hogestyn) in the DiMera crypt!

Days of Our Lives viewers will see MarDevil pull a snow job the size of the moon on Ben and Ciara! Even though Ciara wasn’t totally convinced that Susan’s premonitions had been correct this time, they can’t help but remember Susan’s premonitions about Ciara still being alive led to her rescue! Ben recalls a lot of details that Susan saw were right – and eventually led him to Ciara, even though the clues were like a puzzle with missing pieces once in a while!

Ben and Ciara will be so on target with what they have been told about Marlena’s previous possession so many years ago, that MarDevil will have to do something to throw them off the trail! Days of Our Lives viewers can expect that they may have some questions about the missing John Black (Drake Hogestyn) and possibly Susan’s lack of contact – Ben knows Susan doesn’t give up that easily when she’s worried and Shawn Brady (Brandon Beemer) is Ciara’s brother, so certainly she’s heard John is missing! Days of Our Lives viewers will see MarDevil double down on her deceit, so that Ben and Ciara will never realize they will be living the movie “Rosemary’s Baby”!