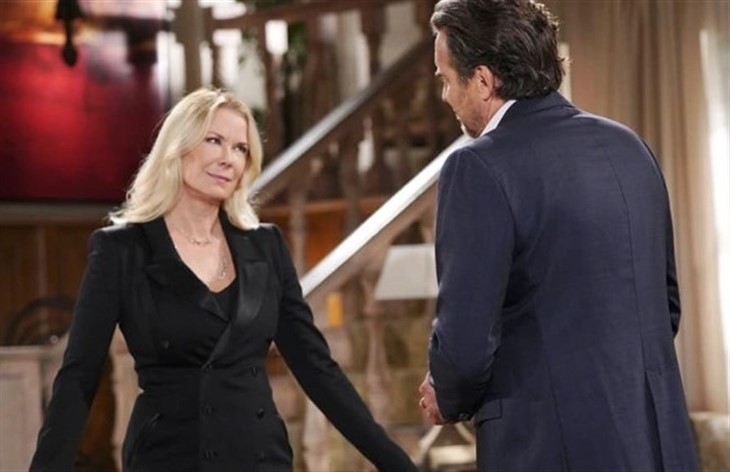 The Bold and the Beautiful (B&B) spoilers for the next two weeks reveal that there will be a lot of drama around Thanksgiving. From November 22 to December 3, Brooke Logan Forrester (Katherine Kelly Lang) will be torn. Sheila Carter (Kimberlin Brown) pounces on an opportunity while Deacon Sharpe (Sean Kanan) daydreams of a family holiday.

The Bold And The Beautiful Spoilers – Sheila Carter Pounces

B&B spoilers for the week of November 22 tease that Jack Finnegan (Ted King) will pay the price for his deception. Li Finnegan (Naomi Matsuda) will be furious and it could mark the end of their marriage. Meanwhile, John “Finn” Finnegan (Tanner Novlan) pushes his father away. This leads Jack to feel very alone and heartbroken, which Sheila uses to her advantage.

As for Paris Buckingham (Diamond White), she will still be thrown by Thomas Forrester’s (Matthew Atkinson) confession. Not knowing how to handle the situation, especially since they are roommates and Thomas has a history of going to extremes for love, Paris seeks help. Paris will turn to Carter Walton (Lawrence Saint-Victor), who will probably advise her to move out pronto.

The situation doesn’t seem to affect Paris and Zende Forrester’s (Delon de Metz) relationship. Or perhaps Paris doesn’t tell Zende. It is confirmed that Zende and Paris will enjoy Thanksgiving with Brooke and Ridge Forrester (Thorsten Kaye). Thomas won’t be there, so that will eliminate an awkward situation for the holiday.

The Bold And The Beautiful Spoilers – Deacon Sharpe’s Family Dream

The Bold and the Beautiful spoilers reveal that Deacon and Sheila will spend Thanksgiving together. There will be no turkey or honey-baked ham, though. The two eat Chinese food, vent about the Forresters interfering and daydream about spending the holidays with Finn and Hope Logan Spencer (Annika Noelle).

During the week of November 29, Brooke will find herself torn between Deacon and Ridge. This doesn’t mean it’s necessarily a love triangle but could be all about Hope’s ultimatums. Plus, it is confirmed that Hope and Deacon will make a deal, which could cause problems with Liam, who has his own agreement with Ridge.

As for what else to expect, Carter and Katie Logan (Heather Tom) will get closer. However, Carter will also take time to reflect due to a new friendship. Will that reflection lead to Carter and Katie having some romance, or will they remain just friends?