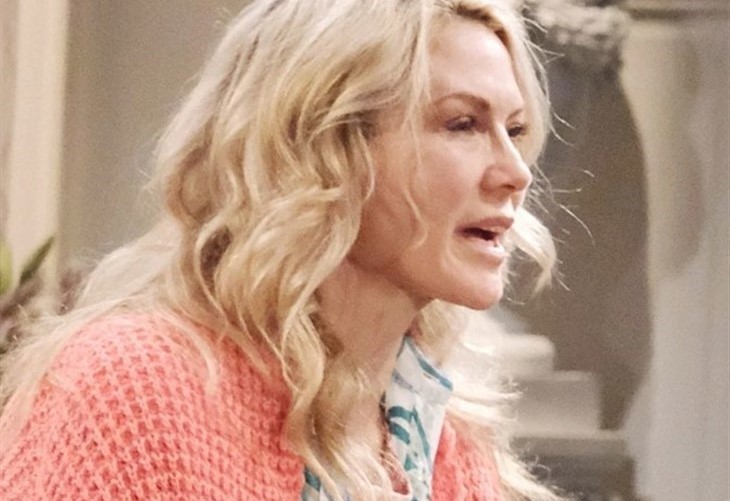 Days of Our Lives viewers will recall that Kristen already blackmailed one unwilling ally into busting her out of the Salem Police Department jail! Kristen confessed the status and whereabouts of Sarah Horton (Linsey Godfrey) and that she had her on a Greek island that her family owns! Kristen blackmailed Gwen with threatening to tell Xander Cook (Paul Telfer) and that if he knew where Sarah was, and she was alive, he’d drop her like a hot potato and run to

Sarah’s rescue! However, considering Kristen is still in jail perhaps she decided to abandon that plan – after all, if Xander finds out what Kristen did to get Sarah on that island, he might just kill Kristen, and she can’t have that! Days of Our Lives viewers know that probably the two strongest allies Kristen has who wouldn’t have problems giving her this type of help are in her own family – namely, EJ DiMera (Dan Feurreriegel) and Tony DiMera (Thaao Penghlis). After all, EJ is an attorney and Tony owes her – Days of Our Lives viewers will recall she saved both their lives in the past.

Days of Our Lives viewers know that there should be three parts to any good escape – distraction, diversion, and disembarking the place where one has been held captive! Days of Our Lives viewers will remember that EJ knew where Kristen was hiding out all along the last time, and the two had kept in touch. EJ’s presence at the Salem Police Department would not be noticed in any great detail, since an attorney often has business. Kristen has been denied bond, for sure or he’d have already bailed her out and gotten her out of town!

Kristen must create a diversion that will also be enough of a distraction so that her brothers can get her out of the jail and on her way to freedom! Plus, it must be believable. Kristen doesn’t have a Melinda Trask (Tina Huang) mask or she might try that, but she does have an idea that would make it completely believable for her family to be called on short notice – and it’s much easier to break out of an infirmary or even out of Salem University Hospital than it is a jail or a prison!

Days of Our Lives viewers know that Thanksgiving Day would be the perfect time for Kristen to start her escape plan – the jail, the infirmary and even Salem University Hospital are likely to be shorter staffed than they normally are. EJ, Tony, and Anna DiMera’s (Leann Hunley) quiet Thanksgiving is disrupted by an emergency call! They are told that Kristen has suffered a possibly serious health issue and EJ and Tony rush over to their sister’s side! There, when they are alone, Kristen tells EJ, who seems to be much more worried than the older and calmer Tony, what she’s really up to.

It turns out Kristen learned a thing or two from their father Stefano DiMera (Joseph Mascolo) about being a “Phoenix”. She didn’t actually convince the first responders that she was quite dead, but definitely that she had collapsed and was unconscious from an as yet undiagnosed ailment! Longtime Days of Our Lives viewers will recall that Kristen fancies herself “The Phoenix’s” successor. While one brother is to distract the guards who are guarding Kristen, the other is to grab some scrubs and disguise himself, and roll her out on a gurney and on her way to freedom!