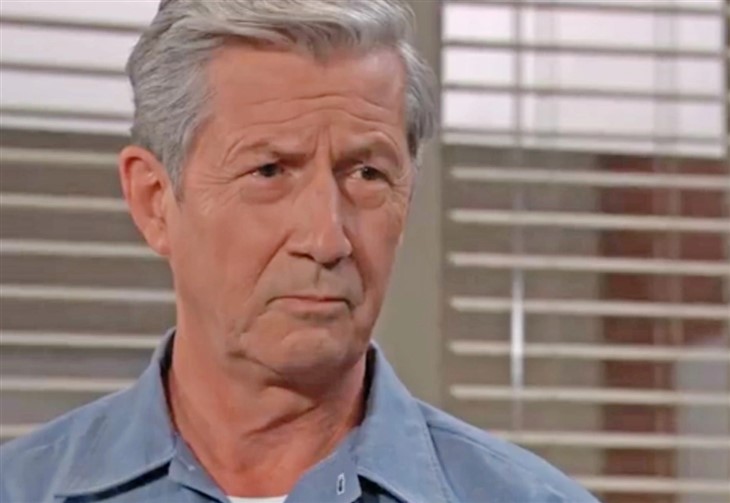 General Hospital spoilers and rumors tease that Victor Cassadine’s (Charles Shaughnessy) in the wind since walking away from the Port Charles jail once Scott Baldwin (Kin Shriner) won him his immunity deal! General Hospital viewers can safely assume he was headed to Cassadine Island, but might he find a seriously injured Jason Morgan (Steve Burton) and nurse him back to health?

General Hospital viewers know that even if out of nothing but obsession, Victor was probably headed to Cassadine Island to find Liesl Obrecht (Kathleen Gati) and rescue her from Peter August (Wes Ramsey). However, nothing was seen of him when the tunnel collapsed and left Jason in the rubble. Neither Anna Devane (Finola Hughes) nor Robert Scorpio (Tristan Rogers) had arrived either, although of course Peter escaped unharmed!

Liesl, her daughter Britt Westbourne (Kelly Thiebaud) and Drew Cain (Cameron Mathison) were also unconscious after the tunnel collapse although they do survive! Anna and Robert didn’t reach the island in time to prevent the assumed tragedy, even though Valentin Cassadine (James Patrick Stuart) was assisting by sending information about the island, the tunnels and the castle to the WSB rescue team that had been assembled to assist Anna and Robert. General Hospital viewers can be sure that Victor knows that island as well as Valentin does, especially considering he too lived there along with the rest of the older Cassadines.

GH Spoilers – Drew Cain’s Priority Will Be To Get The Women To Safety, Even Though Jason Morgan Could Have Been Alive But Unconscious

General Hospital viewers know that Drew’s priority would be to get the women to safety, even though Jason could be alive but unconscious. The tunnels will be much too dangerous to try and dig Jason out from under the rubble, although Drew would likely try to do so in a heartbeat were Liesl and Britt’s lives not at stake! Britt likely puts up a fight but Drew and Liesl will assure her there is nothing to be done, and they will make it out of the surviving parts of the tunnels. They likely connect with either some of the WSB rescue team or with Anna, or Anna and Robert and tell them what happened below.

By the time Victor gets to the island, it may be after Drew and the rest are already on their way back to Port Charles; but it is also possible that Robert finds Victor in the castle and tries to take him in; a preview shows Robert at the door of what might be the Cassadine castle in Greece with gun drawn! Anna is not seen in the preview. But General Hospital viewers will recall that Victor got his immunity deal – Robert can’t bring him in for being in his own property! Victor could also run from Robert and hide in a secret part of the castle.

There is a good possibility that if it is Victor Robert points his gun at in the General Hospital Monday preview, that he’ll get away and as previously mentioned, hide till he leaves. Then Victor will search the tunnels – not realizing Liesl and Britt are already away and safe. However, he may find Jason – unconscious but alive, possibly after trying to at least partially free himself. General Hospital viewers will remember that Victor has medical training – and was once the head of the Crichton-Clark Clinic before it exploded.

General Hospital Spoilers: Cassadine Island Showdown Ahead For Jason And Drew – Will Just One Make It Out Alive? #gh #generalhospitalhttps://t.co/3tBBozf5pI

Victor also may be connected to other medical clinics associated with the DVX, since he’s persona non grata at the WSB, which he also once was the head of! He could even be connected to the Boronsky Clinic in Russia, where Peter had stashed Jason previously as “Patient Six”. It was Victor who found Nikolas Cassadine (Marcus Coloma) after he was shot by Valentin and fell out of an upper window of the Cassadine Island castle and nursed him to health – and helped him fake his death until he returned to Port Charles. If Victor was to find Jason still alive, he would have the medical connections and be well equipped to nurse him back to health!