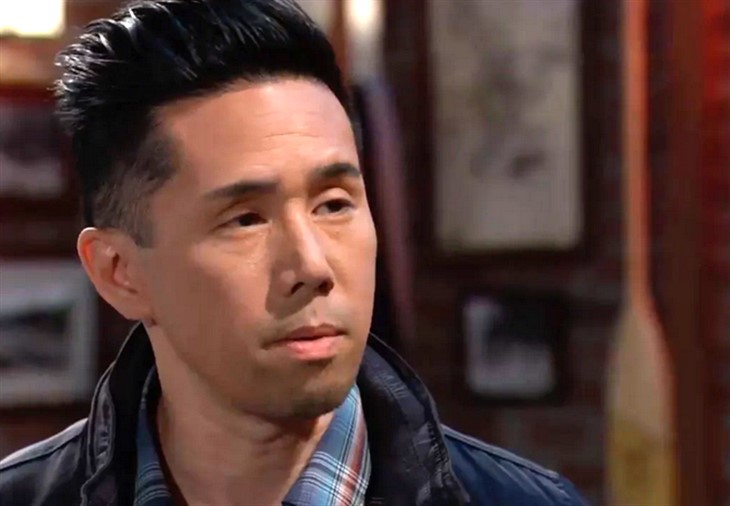 General Hospital (GH) spoilers and updates tease Brad Cooper (Parry Shen) is going to be a free man soon. Brad has been in Pentonville Penitentiary for kidnapping Wiley Quartermaine-Corinthos (Caleb and Kyler Ends). Brad had wanted to be a father with his husband Dr. Lucas Jones (Matt Trudeau). Brad and Lucas had hoped to adopt a child.

Brad and Lucas lost the son they adopted which left Brad devastated. Nelle Benson (Chloe Lanier) wanted to keep Wiley away from his father Michael Corinthos (Chad Duell) and gave him to Brad to raise as his son with Lucas. The truth came out and Brad was sent to jail for keeping Wiley from Michael. Brad is up for parole and will find that life will be different when he comes back to Port Charles.

Brad is the nephew of local crime boss Ms. Nina Wu (Lydia Look). Ms. Wu has wanted Brad to get out of Pentonville because he has had trouble coping in jail. Ms. Wu went to Sonny Corinthos (Maurice Benard) to ask him to not come after Brad when he gets his parole. Sonny is Wiley’s grandfather and could cause trouble for Brad. Sonny agreed to honor Ms. Wu’s wishes because she helped to save Sonny’s wife Carly Corinthos (Laura Wright) and best friend Jason Morgan (Steve Burton). Ms. Wu hopes to be able to help Brad to get his life back on track.

Brad and Dr. Britt Westbourne (Kelly Thiebaud) are best friends. Britt has been dealing with a dangerous situation involving her brother Peter August (Wes Ramsey) and mother Dr. Liesl Obrecht (Kathleen Gati). Britt had gotten Jason to help her because he wanted to help his twin brother Drew Cain (Cameron Mathison). Britt is doing what she can to bring Liesl and Drew back to Port Charles safely. Britt had hoped to have a relationship with Jason but may not be able to be with him. Britt will be excited to find out that Brad has been paroled. Brad can help Britt to deal with the fallout from the perilous situation that she faced from Peter. Britt will need Brad to help her to deal with the fact that she has Huntington’s disease. Brad will want to help Britt to face her disease.

General Hospital Spoilers – Brad Cooper Will Not Have Dr. Lucas Jones In His Life

Brad loved Wiley and was heartbroken when he had to give him back to Michael. Michael and Wiley’s adopted mother Willow Tait (Katelyn MacMullen) will not want Brad to interact with Wiley. Brad will have to find a way to stay away from Wiley. Brad will want the best for Wiley and will want to make sure that Michael and Willow know that they do not have to worry about him interfering with Wiley’s life.

General Hospital Brad will have to find a way to embrace his new normal. Brad will need to find some way to keep from being in Wiley’s life. Can Brad find a way not to interact with Wiley? Brad will need to let Lucas go and find a new love. Can Brad find love with someone new? Brad will want to help Britt to overcome her different problems. Can Brad help Britt to find a way to cope with the all the troubles that she had had to face? Brad will be able to have the support of his aunt Ms. Wu. Will Brad be able to get the help he needs to face his future from Ms. Wu? Be sure to catch up on everything happening with GH right now. Come back here often for General Hospital spoilers, news, and updates.