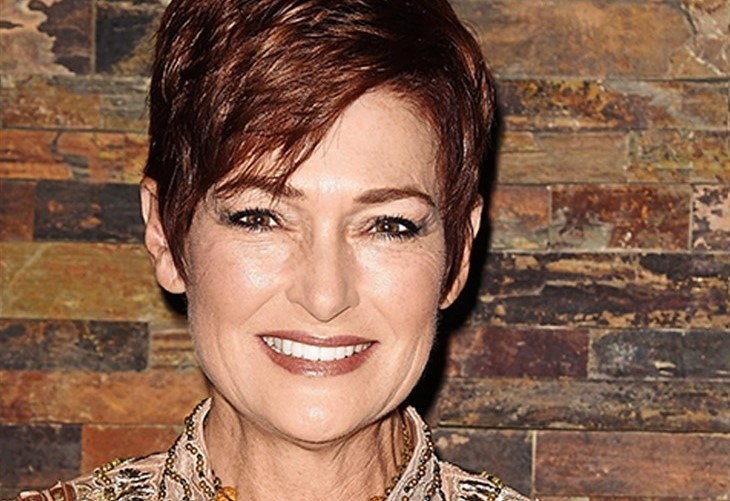 General Hospital spoilers tease that some erstwhile General Hospital reporter didn’t quite get his facts straight when an article was published about the exits of Steve Burton and Ingo Rademacher and apparently several off screen crew members over not abiding by the vaccine mandate. The writer of the TV Source article who shall remain nameless couldn’t spell, either!

General Hospital fans who pay attention would have noted that Carolyn’s name was spelled wrong – it was spelled “Hennessy” which, to be sure, is a more common spelling. Carolyn didn’t ding the reporter on that nor that Ingo Rademacher’s character name was Jasper Jacks and Jax was a nickname so should have been Jasper “Jax” Jacks. She didn’t address that either, and she became aware of it through a fan who had retweeted the TV Source article.

She shut the rumor mill down very quickly by retweeting the fan’s tweet with the questionable article shown in part, with “Your facts are incorrect. Diane’s not going anywhere!” General Hospital fans who love Attorney Diane Miller on their screens should be happy to hear that! As a matter of fact, it seems that a lot of fans do – there were seventy seven retweets, twenty-one quote tweets, and nine hundred thirty six likes. That may not be considered “trending” in the soap twitter verse, but nothing shabby!

General Hospital spoilers tease that Alexis Davis (Nancy Lee Grahn) may go into teaching law or another career path instead of trying to regain her law license, and Molly Lansing-Davis (Haley Pullos) still has a ways to go to be a full lawyer. So, General Hospital viewers know that Port Charles would be without female attorneys if Diane left!

Robert Scorpio (Tristan Rogers) is the district attorney so he can’t be a defense attorney at the same time, besides, he’s not a female! General Hospital viewers know that there are far too many people in Port Charles who need attorneys, and not always cases that Scott Baldwin (Kin Shriner) would want, although sometimes he does get a little bit desperate for work! Diane frequently works for the Corinthos family, and they and Scotty just aren’t a good fit! General Hospital viewers know that Alexis will continue to need a good friend who can keep her straight as well, and Diane will certainly continue to be that friend!

Longtime General Hospital viewers will recall that Diane Miller first appeared in January 2007. Sonny Corinthos (Maurice Benard) had hired Diane Miller to represent him based on her reputation as a brilliant attorney with a nearly perfect courtroom record, dry wit, blunt manner, and acerbic observations. Sonny was on trial for the death of Lorenzo Alcazar (Ted King) at the time. Diane advised Sonny to remarry his ex-wife Carly Jacks (Laura Wright) so that she wouldn’t have to testify against him.

Then, when a woman with information that exonerated Sonny stepped forward, Diane informed Sonny he could still annul his marriage to Carly, but he convinced Diane not to tell her. Diane’s top-notch trial skills worked and, with Diane’s help, Sonny once again escaped the long arm of the law. Diane has worked for Sonny and the Corinthos family and close friends ever since.