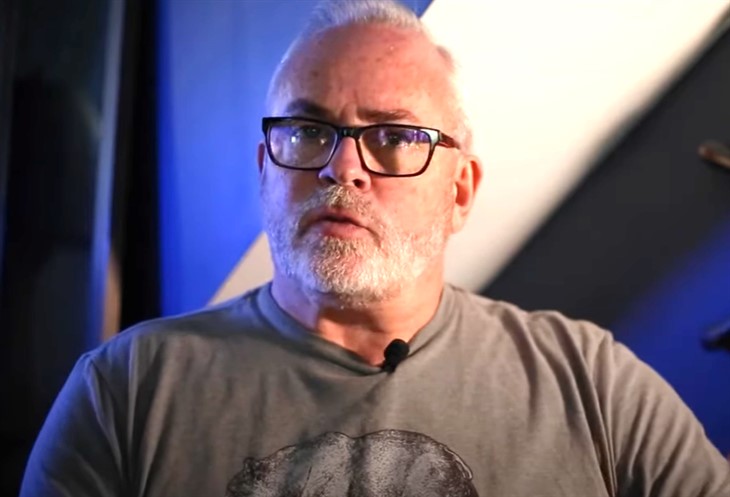 When Survivor first aired, Richard Hatch led the way in showing what it takes to outwit, outplay, and outlast other contestants. And Hatch still holds onto his triumph in reigning as the castaway competition’s very first winner.

Now, as Richard watches season 41, he feels ready to inform host Jeff Probst exactly what he’s doing wrong. Add in slams for the current episodes, and Hatch proves he loves that spotlight! Find out what the original winner of Survivor revealed in his YouTube video analysis below. Warning: As usual, Richard goes bare-chested for extra points (we’re not saying whether those points add to or subtract from his analysis!).

Survivor original winner Richard Hatch often posts about the show that turned him into a star. Now, in his YouTube channel, Hatch analyzes what he feels went wrong with season 41. And yes, the Survivor superstar decided to bare his chest in all its, um, glory.

Overall, Richard feels that Survivor has misplaced its original goal of pitting players against each other in challenging locations. As a result, Hatch claims that season 41 contains too many “horrific changes.” Calling those changes “distractions,” the Survivor winner expressed concern that producers interfere too much with the game itself.

Does Survivor face the risk of falling apart due to all those switch-ups? That’s what Richard claims. And that slam parallels what other critics have found wrong with the current season. Although host Jeff Probst seems proud of the new twists and turns, viewers and critics tend to agree with Hatch that the layered-on new rules confuse rather than complement the name of the game.

Jeff Probst came in for the lion’s share of slams in Hatch’s video. For instance, Richard claims that all those new elements equal nothing more than “just pure Probst ego, interjecting himself into the game.” As for Jeff’s hosting skills? That gets more tricky, admitted Hatch.

But overall, the original winner of Survivor believes that the role of host requires guiding contestants rather than becoming a reality TV star. As a result, Probst should stop “trying to increase his profile,” slammed Richard. Season 41 reveals Jeff has become “overly involved,…stealing airtime, and making decisions that undermine…Survivor,” he added.

Richard Hatch summed up all his criticism by describing Jeff Probst as a “terrible influence, a really disrupting and undermining factor that saddens me.” But while Richard indulges himself in slamming the long-time Survivor host, Jeff himself seems oblivious and unaffected by any criticism. For instance, Probst has used his 41st season spotlight to flaunt his fame, posting frequent throw-back pics to emphasize his longevity.

The Survivor host’s Twitter reveals that love for proving that when it comes to outlasting, he’s the winner! A recent tweet showed Jeff’s original method of transportation, then compared it to his current travel style.

Responses to Jeff’s throw-back pics vary, with some joining Richard Hatch in criticizing the host and other Twitter followers cheering for Probst. One even offered suggestions for season 42. “Still waiting on the cowboy hat Jeff to return. We need to see him in Survivor 42!” urged a follower.

What do you think of Richard Hatch’s slams for Survivor season 41? Do you agree that Jeff Probst has dominated the spotlight and should step down? Share your views with us. And then check back on our site for all the Survivor news.