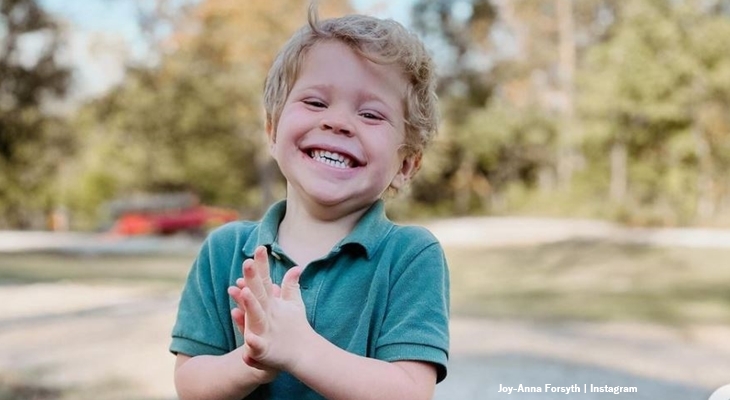 Counting On fans know that kids will be kids and it’s really hard to get family photos that show the whole family looking in the same direction. Or, sometimes, kids scatter all over the place, so they don’t fit in the picture. But this week, when Joy-Anna Forsyth shared her Thanksgiving photos, she seemed philosophical about Gideon who successfully spoiled their family photos.

In the next few days, Josh Duggar stands trial on charges of alleged pornography involving children. It’s very serious, but the entire family seems to put a brave face on things. Actually, if he goes to prison, it might be many years before he ever spends time with his family again, TLC fans feel sad for Anna who seems to think he’ll be a free man once the court hears her husband’s defense. Meanwhile, the family seems entirely unperturbed by it this Thanksgiving.

Counting On fans saw that the Duggar family posted up happy Thanksgiving photos as usual. Then, the individual adults also shared their pictures. Joy-Anna followed in the same way. She posted up three photos but unsuccessfully captured everyone in the right place, at the right time. While Gideon spoiled the photos, she seemed unworried and took it calmly.

In her photos, Gideon made a funny face in one photo. Then, in another one, he stuck his tongue out at the camera. Then, when they finally looked reasonable, he closed his eyes. So, none of them came out perfectly. Resigned, Joy said in her caption, “Couldn’t get a picture of all of us looking at the camera, but that’s reality, and I’m thankful for it.😉.” Then she added, “I am so grateful to God for giving me these three.❤️” 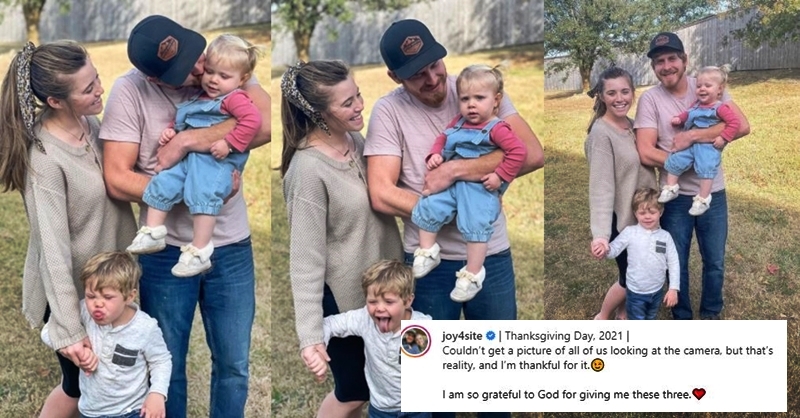 Counting On fans still follow Joy-Anna Forsyth, despite the show being canceled by TLC. After all, she didn’t do anything wrong and she isn’t facing any judges or trials in the coming days. Some loyal fans actually think it’s very sad that the whole family lost their show because of one bad egg.

Counting On fans took to the comments section of Joy-Anna’s post, Amused, one of them wrote, “perfect pictures… love Gideons faces! 😍” Then another fan noted, “Gideon is a MOOD!” This comment also arrived, “Loving Gideon’s face totally priceless❤️❤️❤️.” One fan even noted, “Love that tongue!❤️”

Actually, quite a lot of fans agreed that the photos were real, not staged, and just the way life is meant to be. Do you agree? Sound off in the comments below.