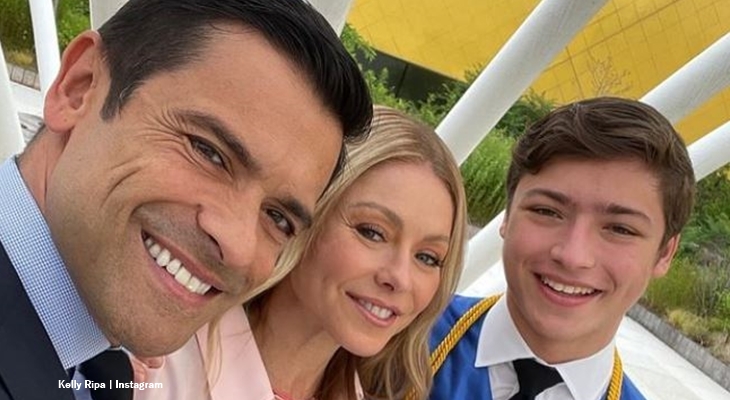 Kelly Ripa is no stranger to sharing throwback photos. Often, she posts up hot and slinky pix of herself with her handsome husband, Mark Consuelos. Other times, she shares photos of the kids when they were small. Or, she shares photos of herself from her younger days. On Thanksgiving, though, the Live With Kelly and Ryan host shared a throwback photo to earlier days and it involved her mom. Actually, fans were totally impressed by her epic hairstyle.

These days,  Kelly and Mark seem to get along like a house on fire. He’s sometimes away filming for Riverdale, but he always walks back into welcoming arms at home. In his absence, she often shares photos of them together, and some of them verge on not being right for family audiences. It wasn’t always like that. Back in 2013, she became furious with Mark flirting with his co-workers. He once featured on the cover of The National Enquirer with sources claiming that Kelly freaked out at his close friendship with his Alpha House co-star Yara Martinez.

Kelly Ripa clearly got over that and more recently, she shares some really steamy photos of her man. Two months ago, she posted up a photo of sweaty Mark wearing a light grey tank top and navy blue shorts. But, the thing that caught the eye of fans was the muscle and the toned flex enough to show through his top. Yum, they thought. Mind you the circumstances weren’t romantic as Kelly explained the air conditioner broke down.

The photo that the TV star shared on Thanksgiving was certainly family-friendly. In fact, younger people might goggle at it with amazement. It revealed her mom with her very young daughter. In the photo, Esther Ripa somehow kept her hairstyle perfect even though it was piled impressively high, In her caption, the star said, “especially grateful for this gorgeous lady. Special shoutout to mom’s hair. Thankful it never collapsed during a single thanksgiving 🙏🏼🦃🎉.”

The mom of Kelly Ripa was born in 1941. However, she certainly rocked her hairstyle back in the day. Fans and friends responded. One amusing comment came from Makeup Artist Kristofer Buckle. he wrote, “That is some epic hair!! Also explains the hole in the ozone layer❤️❤️.” Of course, he meant the amount of hairspray involved.

One fan of Kelly Ripa commented, “cascade of curls. I basically have the same picture of my mom holding me 1971/72. Everybody smoked back then (my mother didn’t, but there were enough cigarettes around us). I’m surprised @instasuelos (Kelly!) and the rest of our generation didn’t go up in flames from the hairspray/cigarette combo.”

If nothing else, the photo speaks of a different world not that long ago and still within the grasp of normal human memory.

Be sure to catch up on everything happening with Live With Kelly and Ryan right now. Come back here often for more news, and updates from Kelly Ripa.