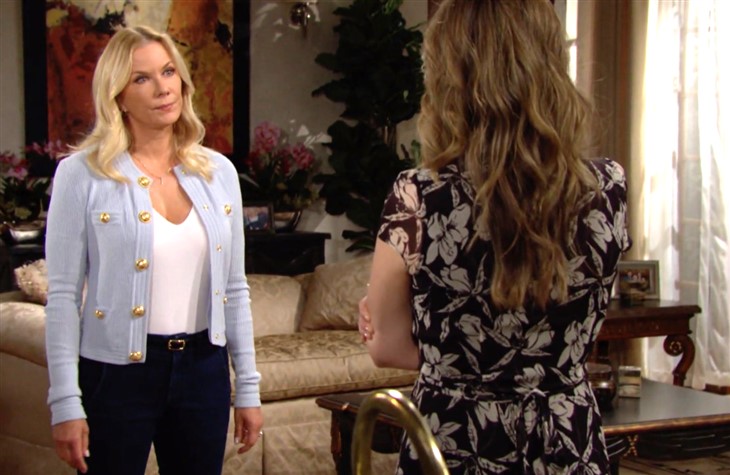 The Bold and The Beautiful (B&B) spoilers tease that Brooke Forrester (Katherine Kelly Lang) will find herself in a war between her daughter, her husband, and Deacon Sharpe (Sean Kanan) in an upcoming episode of The Bold And The Beautiful!

Viewers of The Bold and The Beautiful know that Hope Spencer (Annika Noelle) is determined that Deacon, her birth father be in her life and get to know his granddaughter, Beth Spencer (River Davison) as well. On the other hand, Hope’s stepfather, Ridge Forrester (Thorsten Kaye) who raised her as if she were his own daughter for a large part of her life, doesn’t believe people can change, and doesn’t believe in second chances.

In the middle is Brooke – who as viewers of The Bold and The Beautiful will recall from previous episodes, remembered the good things about Deacon and her past with him, even though she was in the wrong to have an affair with him while he was married to her oldest daughter Bridget Forrester (Ashley Jones). Longtime viewers of The Bold and The Beautiful will recall that it was during this affair that Hope was conceived. Hope corresponded with Deacon through the years of his prison sentence, and her home is the first place he came after his sentence was served and he was paroled.

In an upcoming episode of The Bold and The Beautiful, Ridge pays a surprise visit to Hope and Liam Spencer (Scott Clifton) at the cabin. When he arrives, neither Hope nor Liam are home, and there is Deacon, by himself! Ridge, of course, assumes Deacon has broken into the cabin to help himself to whatever he can make off with, and Ridge literally tries to throw him out and likely prepares to report him for breaking and entering, thus breaking his parole which could send him right back to prison! Viewers of The Bold and The Beautiful can guess that Ridge figures that’s where people like Deacon belong and he should never have been let back out to be inflicted on society!

In the middle of Ridge’s tirade against Deacon, Hope arrives along with Brooke! Things escalate very quickly as Hope intervenes on behalf of Deacon against her stepfather! Brooke doesn’t mince words when she tells Ridge that Hope has every right to include her birth father in her life, and that Deacon’s doing nothing wrong. That throws Ridge for a loop! He leaves before he gets himself in further trouble with his wife!

He remembers the pain Deacon caused Brooke and doesn’t want a repeat performance. But Brooke won’t back off defending Deacon, and Ridge reaches a breaking point! Ridge is forced to reconsider his feelings about Deacon being in his wife and stepdaughter’s lives, and he is also forced to consider what else he may have been wrong about!