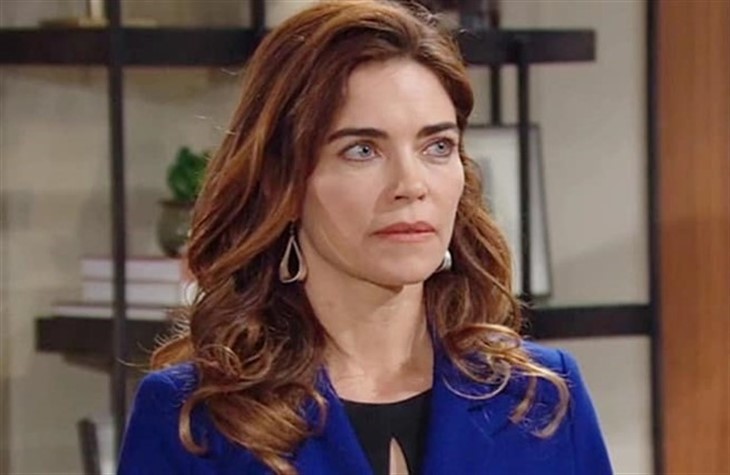 The Young and the Restless spoilers reveal that Sally Spectra (Courtney Hope) “understands the assignment.” Could Victoria Newman-Locke (Amelia Heinle) and Ashland Locke (Richard Burgi) use Sally’s insecurity about her job at Newman Media to launch an attack on Adam Newman (Mark Grossman)?

The Young And The Restless Spoilers – Victoria Newman-Locke’s Hug

Y&R spoilers reveal that Sally was determined to rise to the top and knew that Victoria was a clear shot at that. Despite the Newman family’s feelings about Sally, she did manage to get Victoria to wear the wedding dress she designed. Her methods were devious, but in the end, Victoria gave Sally a hug. This doesn’t mean that Victoria trusts or even likes Sally. However, Victoria knows how to put people in her pocket should she need them at some point.

Sally loves her job at Newman Media and also has feelings for Adam. Despite Adam’s hot and cold attitude toward Sally, she has written him off. At least, for the time being. Perhaps Chloe Mitchell (Elizabeth Leiner) is right and Sally is using reverse psychology on Adam. Or Sally might be really trying to just focus on work, especially with Chelsea Lawson (Melissa Claire Egan) returning.

Sally is aware that Newman Media is in a war with Billy Abbott (Jason Thompson) and ChancComm. Sally has made it clear that she’s worried about her job. If Victoria and Ashland become aware of this, they could use it to their advantage.

The Young And The Restless Spoilers – ‘Ashtoria’ Plot Their Next Move

The Young and the Restless spoilers reveal that Victoria and Ashland gave Billy and Lily Winters (Christel Khalil) an offer. There is no way that Lily will ever work under Ashland and Victoria, though. Plus, we know that Jill Abbott (Jess Walton) returns and makes her own big offer to Lily. It is teased that Lily adjusts to her new role, so it sounds like she accepts the position.

Plus, Jill will start a bidding war, which will force Ashland and Victoria to step up their scheme a few notches. “Ashtoria” will plan their next big move, but they might need insider information.

It is possible that Victoria will use her wedding hug and Sally’s job insecurity to her advantage. If anyone else would approach Sally with an undercover assignment, especially if it affected Adam and Newman Media, she would probably say no. However, Sally is also desperate to prove she’s not as evil as everyone believes. Then, there is the job insecurity over Adam and Victor Newman’s (Eric Braeden) attack. Victoria might even promise Sally a better future.

It’s not money or publicity that Sally wants… it’s to be respected by the people of Genoa City instead of hated. Victoria might promise that she can help Sally achieve this goal. Despite Sally’s feelings for Adam, she also doesn’t like being rejected. So, Victoria’s well-timed undercover assignment for Sally just might leave Adam betrayed by the last person he expected. Will Sally regret her decision, though?