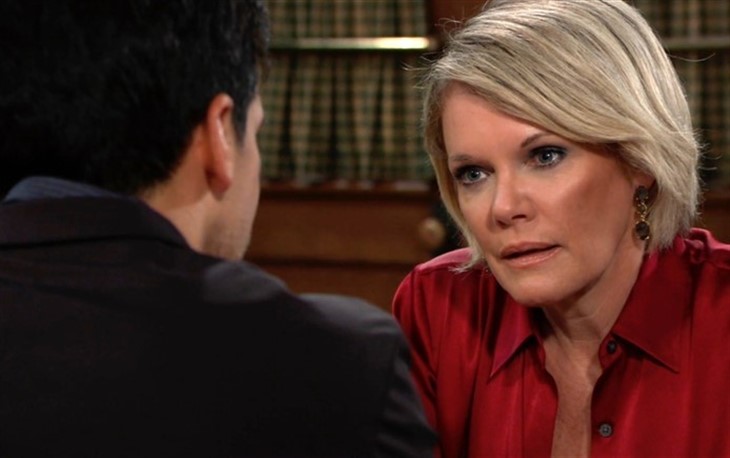 General Hospital viewers will recall that Ava has been growing suspicious of some of Nikolas’ actions. Ava has overheard parts of phone calls to people unknown and he’s not being upfront about them. Even though they are not joined at the hip, communication is important and she is concerned that he’s holding back. General Hospital viewers will recall that Nikolas has not revealed very much about the years that he was missing and presumed dead – only recently did he admit that his great uncle Victor Cassadine (Charles Shaughnessy) had nursed him back to health after Valentin Cassadine (James Patrick Stuart) shot him

. Nikolas had been pressed about the Cassadine properties in Crete, which he claimed had been sold long ago. Now that everyone is back from Cassadine Island and Victor was captured at the properties he was still using in Crete, Nikolas has been proven a liar! What else could Nikolas be involved in? Ava is concerned that Nikolas may be getting himself – and maybe her with him- in some trouble with all these secrets!

GH Spoilers – Ava Cassadine Has Somewhat Redeemed Herself, But She Still Knows How To Be A Rat As Well As Know The Smell Of One!

General Hospital viewers will recall that since the death of her daughter Kiki Jerome (Hayley Erin), Ava has somewhat redeemed herself; she’s not the mobbed up woman she was when she first came to Port Charles! But Ava still has that mob skill set and she knows how to be a rat as well as know the smell of one, and she’s not beyond trying to help her husband cover up some things if he’s going to be in trouble!

General Hospital viewers know that some of the things Nikolas did years ago may be just on the verge of trying to bite him back – and he had recently called Victor to ask if he had anything to do with the death of Hayden Barnes’ (Rebecca Budig) mother Naomi Berlin (Gigi Bermingham). Shawn Butler (Sean Blakemore) has been asking Nikolas a lot of questions about Hayden lately because he wants to clear his name even though he’s been paroled. The last time anyone saw Hayden was when Nikolas “scared her” out of Port Charles – leaving her small daughter by Hamilton Finn (Michael Easton) behind over a year ago!

General Hospital viewers can understand why Ava wants no secrets in her relationship with Nikolas. Secrets kept from spouses never add up to any good, and can erode the trust between them. Even if the secrets have nothing to do with the marriage itself, especially when one or other of the couple has been involved in some dangerous things from time to time, everyone needs to be on board to be able to protect the other!

General Hospital viewers know that of late, Ava and Nikolas have been dealing with fallout from Spencer Cassadine’s (Nicholas Chavez) stalking behaviors and his creepy girlfriend’s Esme Prince (Avery Kristen Pohl). But Ava knows that there’s been something going on behind the scenes and she confronts Nikolas and reminds him that secrets can come back to haunt you, and he’d better let her in on what’s going on! She can’t help protect him if he needs protection otherwise!