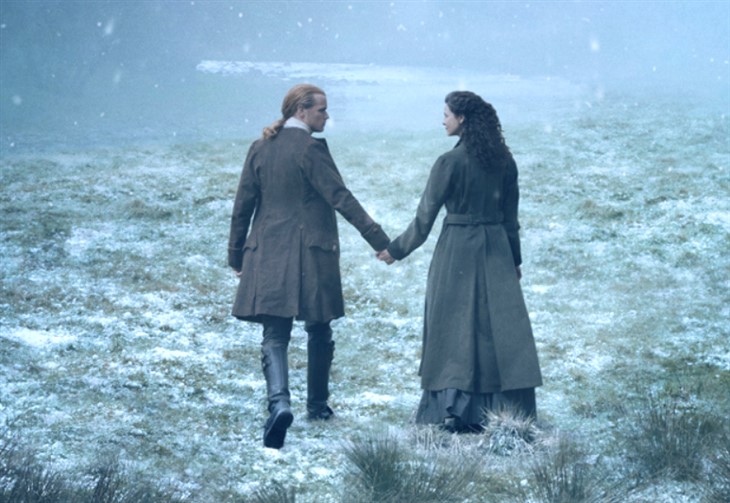 Outlander spoilers and updates tease that Starz dropped the opening sequence for the upcoming season 6. It gave fans a sneak peek of what they can expect in the next season.

In the newly dropped opening sequence, it was revealed that The Skye Boat Song, which plays at the start of every episode, has been tweaked. Some of the visuals in the sequence can also be tied to the Diana Gabaldon novel, titled A Breath of Snow and Ashes.

In the opening credits, fans will see the lantern dancers, bald eagle, Muddy Claire’s legs, Jamie riding a white horse out of the stables, Target practice at Fraser’s Ridge, someone walking uphill, and another person who’s sitting near a fire.

The video also shows a snap of a beautiful lake, a woman holding a man’s hand behind bars, Claire caressing Jamie’s scarred back, a little boy running with a wooden airplane in his hand, Roger praying, and Brianna striking a match.

Outlander  Spoilers – What To Expect From Season 6

Lauren Style has teased that season 6 will be “a lot darker” while Caitriona Balfe said the new season will be a “heartbreaking and twisted” one.

Starz wrote, “To show how thankful we are for all you Outlander fans this Thanksgiving, we’re bringing you the wonderful Season 6 rendition of our Skye Boat Song by Raya Yarbrough and Griogair Labhruidh.”

Starz president and CEO Chris Albrecht also dropped some hints on what they can expect from the new season. Fans will see Claire and Jamie (Sam Heughan) face new challenges, enemies, and adventures.

Heughan shared that he’s really pleased with the new season. He told fans that the season will be “small and mighty” and it’ll have an “early western vibe.” In a previous statement, Heughan revealed that the pandemic and the cold conditions had created a strange vibe for the show.

He admitted that it was challenging and weird. When they were filming season 6, they were the only ones out and about. There was no one else driving on roads to go to work. So it was a crazy experience for them all. But they’re all extremely proud of the work they’ve done.

Outlander season 6 is slated to premiere on March 6, 2022. It’s also been confirmed that the show will have a seventh season.

Gabaldon revealed that there are 10 books that feature the Fraser family. It’s possible for the show to have 10 seasons as well. But Gabaldon also added that it all depends on Jamie and Claire. If they’re not yet ready to die then she’ll have no choice but to go on.

Be sure to catch up on everything happening with Outlander right now. Come back here often for Outlander spoilers, news, and updates.