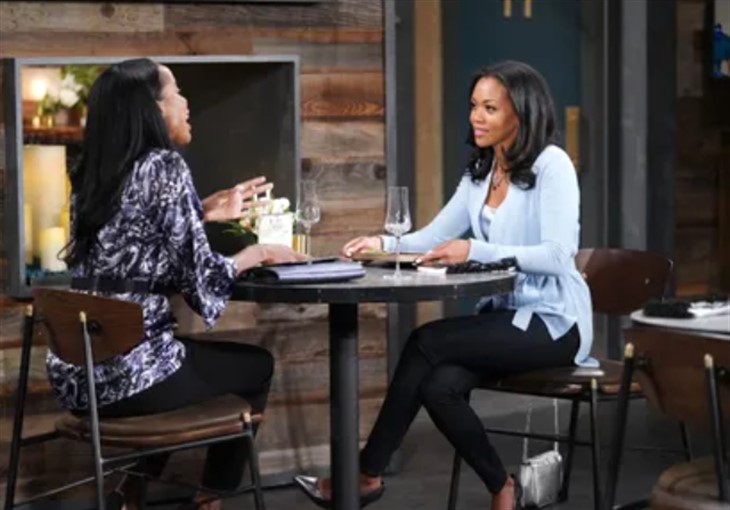 The Young and the Restless (Y&R) spoilers and updates tease Amanda Sinclair (Mishael Morgan) has much to be grateful for. She has a successful law practice. She has been able to connect with her mother Naya Benedict (Ptosha Storey) and her sister Imani Benedict (Leigh-Ann Rose). Amanda is in a committed relationship with Devon Hamilton (Bryton James). Amanda has had to overcome finding out that her grandfather Sutton Ames (Jack Landron) was responsible for the death of her father Richard Nealon (no actor’s name known for this retrospective role).

Amanda has been fiercely determined to see Sutton be brought to justice for arranging to have Richard killed. Amanda never got to know Richard or her twin sister Hilary Curtis Hamilton (Mishael Morgan) because of Sutton’s manipulations. Amanda has been working with Michael Baldwin (Christian LeBlanc) on the case against Sutton. Amanda testified against Sutton and is hoping that her testimony will help the jury to convict Sutton. Amanda may get the news that she has been hoping for and that Sutton will have to face the consequences of his actions.

Amanda did not get to have Naya and Imani in her life when she was growing up. Amanda has been getting used to being able to rely on having someone in her family that she can turn to. Naya and Imani have had trouble dealing with the fact that Sutton had Richard killed. Naya almost went to jail for Sutton but Amanda was able to help Naya to get free. Naya is having problems with her health and has decided to move to Genoa City to be close to Amanda and Imani. Amanda is hoping to be able to open a law firm with Imani. Amanda hopes that she will continue to get closer to Naya and Imani.

Amanda has found a stable and happy relationship with Devon. Amanda has been trying to help Devon who has been concerned about his friend Abby Newman (Melissa Ordway). Devon had helped Abby realize her dream of becoming a mother and has been helping her with her son Dominic Phillip Newman-Abbott-Chancellor (no actor’s name known for this important role). Abby has been trying to deal with the fact that her husband Chance Chancellor (Conner Floyd) has been declared dead. Abby wanted Devon to take care of Dominic because she has hoped that she might find that Chance is alive. Amanda has been supporting Devon during the time that he has been trying to help Abby. Amanda had moved in with Devon and has seen that he has been good with Dominic. Amanda may start to want to start a family of her own with Devon in the future.

The Young and the Restless Amanda is looking toward her future. She is hoping to put the past behind her and move on after Sutton is brought justice. Can Amanda find a way to move past betrayal that she felt because Sutton had Richard killed? Amanda wants to have a close relationship with Naya and Imani. Can Amanda, Naya, and Imani form a strong family bond? Amanda wants to be with Devon and have a good future with him. Will Amanda and Devon be able to find a way to have a bright future together? Be sure to catch up on everything happening with Y&R right now. Come back here often for The Young and the Restless spoilers, news, and updates.