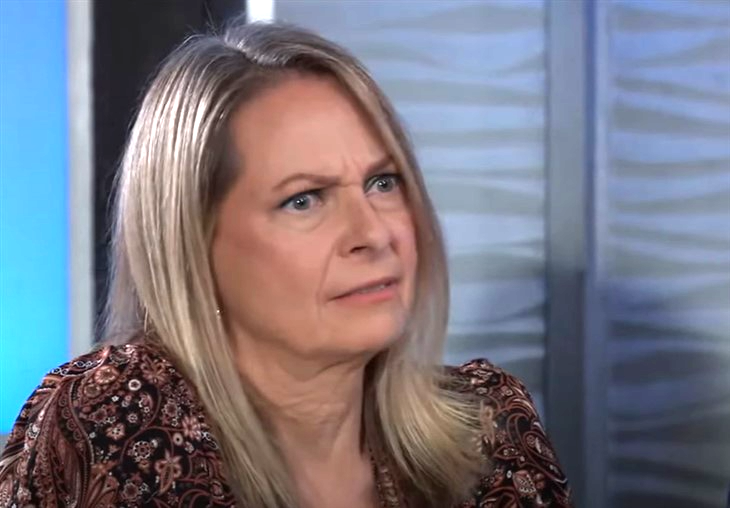 General Hospital (GH) spoilers and updates tease Gladys Corbin (Bonnie Burroughs) has been causing trouble. Gladys has gotten into trouble because of Sasha Gilmore (Sofia Mattsson) and Valentin Cassadine (James Patrick Stuart). Gladys did not know if she wanted Sasha to be with her son Brando Corbin (Johnny Wactor).

Sasha and Brando have been looking forward to becoming parents. Gladys has found out that Brook Lynn Quartermaine (Amanda Setton) has been lying to Valentin. Gladys used that knowledge to blackmail Brook Lynn. Glady has found that her scheming has been causing pain to many and has started to regret her actions.

Gladys has been reluctant to accept Sasha being a part of Brando’s life. Gladys has thought that Sasha was not good for her son because she had a brief addiction to drugs. Gladys had been worried about Brando because he had battled his own addiction. Gladys has wanted Brando to become part of Sonny Corinthos’ (Maurice Benard) mafia organization. Brando has wanted to stay out of Sonny’s business and be with Sasha and their son. Sasha and Brando thought that the birth of their son would be a happy experience. Sasha had a difficult delivery of her son and he is having medical troubles.

Sasha and Brando are scared that their son will not come through his medical problems. Gladys is afraid that she will not get to be a grandmother to her grandson. She told Sonny and Carly Corinthos (Laura Wright) about her fears. Gladys wants to do what she can to help Brando and Sasha. She wants to make sure that Sasha has want she needs to be able to take care of her son.

Gladys found out that Brook Lynn was keeping a secret from Valentin. Brook Lynn is raising Louise August (Odell-Diaz Twins) as her daughter Bailey Quartermaine. Maxie Jones (Kristen Storms) gave Louise to Brook Lynn because she has been concerned about Louise’s father Peter August (Wes Ramsey) being her life. Brook Lynn had passed Louise off as Valentin’s daughter because she wanted to get him to give back her ELQ shares that he had gotten from her.

Gladys had been using the knowledge that Valentin was not Louise’s father to her advantage. Gladys likes and respects Valentin. She believed that he needed to know the truth about Louise. Gladys will find out that Valentin is devastated by finding out that Louise is not his daughter. Gladys will feel badly for the fact that she helped to cause Valentin to be in pain.

General Hospital Spoilers – Gladys Corbin Decides To Do Better For Everyone

General Hospital Gladys has started to want to be a better person for those that are around her. Gladys wants to be a part her grandson’s life. She wants to support Brando and Sasha to help them as they find a way to make sure their son gets the help he needs. Will Gladys be able to help Sasha and Brando to do what they do what they need to do for their son?

Gladys will want to show Valentin that she is a friend while he is trying to deal with losing Louise as his daughter. Will Gladys be able to help Valentin in some way to deal with his grief? Be sure to catch up on everything happening with GH right now. Come back here often for General Hospital spoilers, news, and updates.