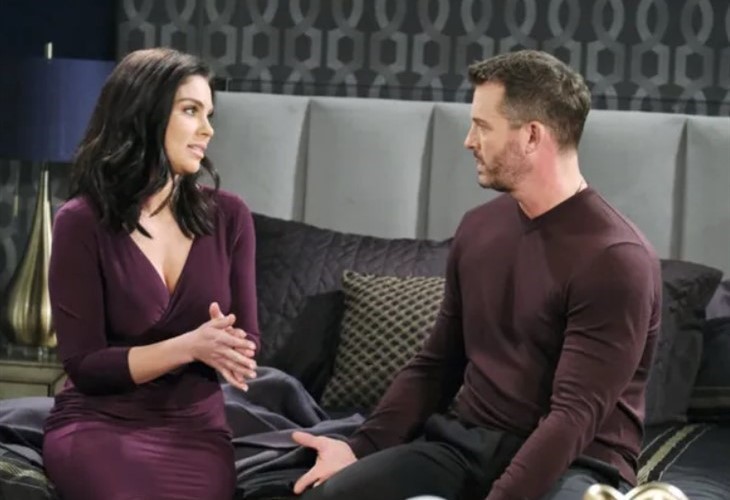 Days of Our Lives viewers will see that Chloe Lane (Nadia Bjorlin) is at the riverbank when Brady’s bloodied body surfaces, and she finds him not only bloody, but boozed up! Plus, there’s a knife beside him and he barely knows who he is or where he is let alone whose knife that is or how it got there! Brady is in a state of total confusion!

Days Our Lives Spoilers: Abe Deals With His New Relationships With Lani And Paulina

Chloe checks him over, as does he, when he is somewhat coherent and they find that he is not wounded – but yet there is blood all over him! Days of Our Lives viewers can see that obviously someone is wounded, and he had to have been in the fight of his life with someone, and likely using that knife! Chloe wasn’t looking for Brady down by the riverbank though, she was looking for Philip, who has gone missing.

DOOL Spoilers – Brady Black Is Checked Out At The Hospital

Days of Our Lives viewers will see that Brady is then brought into Salem University Hospital and checked out by Dr. Kayla Johnson (Mary Beth Evans). Chloe still has the missing Philip on her mind and asks him if he’s seen him, Brady says he hasn’t.

Days of Our Lives viewers, however, remember that it was Philip who came up behind Brady with a crowbar or other blunt force weapon, knocked him out, and dragged him off outside of Brady’s Pub in a recent episode of Days of Our Lives. Chloe decides to give Philip a call as she is still at the hospital with Brady, and it rings – in Brady’s pocket! In the meantime, Brady had passed out again and when he comes to she confronts him about why he has Philip’s phone, totally unaware that it was in his pocket!

As Days of Our Lives viewers can imagine, Kayla takes some blood tests on Brady, and the lab results show he is intoxicated – something he also denies! Brady insists that he wasn’t drinking and is borderline belligerent about it. It is very frustrating for Brady, who has been sober for such a long time and he just doesn’t understand it.

Days of Our Lives viewers will also recall from a recent episode of Days of Our Lives, that he had called Maggie Kiriakis (Suzanne Rogers) recently and she came, and while she saw a glass of booze, he had not touched it. Then Kayla tells Brady, with Chloe present, that the blood type that was found on Brady’s clothes is not his—but it is a match for Philip’s blood, which she knows. Later Shawn Brady (Brandon Beemer) comes and shows Chloe a bloody knife found at the riverbank, and Chloe confirms Philip’s blood type.

Days of Our Lives viewers know that Philip knocked Brady out and drug him away, the question is, what happened afterwards? Chloe, with Shawn still there, panics, thinking Philip had to have been the victim of a terrible assault, and there must have been an altercation!

Days of Our Lives viewers will see her jump first to the conclusion that Philip went off the deep end, but then realizes Brady must have stabbed Philip, and Brady doesn’t remember any of it! This is, of course, driving a huge wedge between Brady and Chloe now, with her not knowing whether she can trust him any more than she trusts Philip! In the meantime, Philip is still missing!