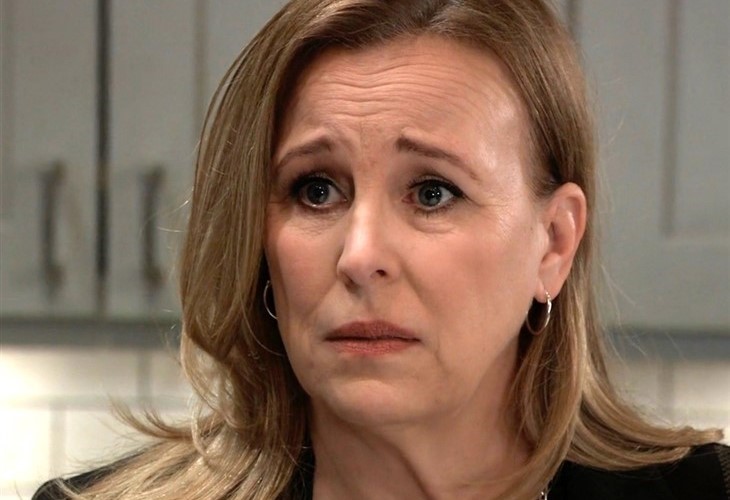 General Hospital (GH) spoilers tease that Laura Collins (Genie Francis) will be blindsided when she learns Victor Cassadine (Charles Shaughnessy) is alive in an upcoming episode of General Hospital!

General Hospital viewers will recall that Laura, along with Attorney Martin Grey (Michael E. Knight) were put into protective custody after the Port Charles Police Department received intel that Cyrus Renault (Jeff Kober) had put hits out on them from behind bars. Martin and Laura have been stuck in a safe house for many months, and it will be interesting for General Hospital viewers to see if they’ve gotten closer, having to share quarters as if they were raised as brother and sister!

It does appear that they have become closer, as viewers will see them playing games to pass the time. Laura, who obviously has been keeping in touch with what’s going on back home, worries over the troubles with Spencer Cassadine (Nicholas Chavez) and Nikolas Cassadine (Marcus Coloma) not to mention Cyrus is out to kill her and Martin, hence the “extended vacation”.

General Hospital viewers found out several weeks ago that Victor Cassadine (Charles Shaughnessy) is alive – and to newer General Hospital viewers, Victor probably doesn’t seem all that dangerous. But for Laura, who was kidnapped and forced to become the bride of Stavros Cassadine (most recently Robert Kelker-Kelly) which is how Nikolas was conceived, it’s a whole different story!

Martin can understand how dangerous Victor is when she describes him to her and his past that she knows, and why Laura would be absolutely terrified that he’s alive! She is in a panic, trying to figure out how she can get to Port Charles to protect her kids! Martin will try to calm Laura down but it will be an impossible mission! General Hospital viewers will recall that Valentin Cassadine (James Patrick Stuart) is Martin’s client but also the closest thing he has to a friend in Port Charles, and Michael E. Knight in Soap Opera Digest implies that Laura has received the news that Victor is claiming to be Valentin’s father, so there is a double whammy for him now if this turns out to be true!

General Hospital viewers will see Martin trying valiantly to keep Laura in their safe house and out of danger! General Hospital viewers will note that Martin has become quite fond of his half-sister, and has become very protective of her. It will be difficult for Martin to keep her from leaving the safe house, and if she leaves in spite of his efforts, he knows he won’t be the best protector against their mutual brother, Cyrus, and Victor is an unknown entity to him!

However, there is Valentin, and if Victor is Valentin’s father one could hope that Valentin could have some influence on him! However, as General Hospital viewers know, Valentin only just has recently found this out, and there are still DNA tests to pursue! Valentin’s kind of to the “maybe he is my birth father” stage, since he has known Victor longer than Laura had!