The Bold And The Beautiful Spoilers: Crazy Sheila Ups The Ante 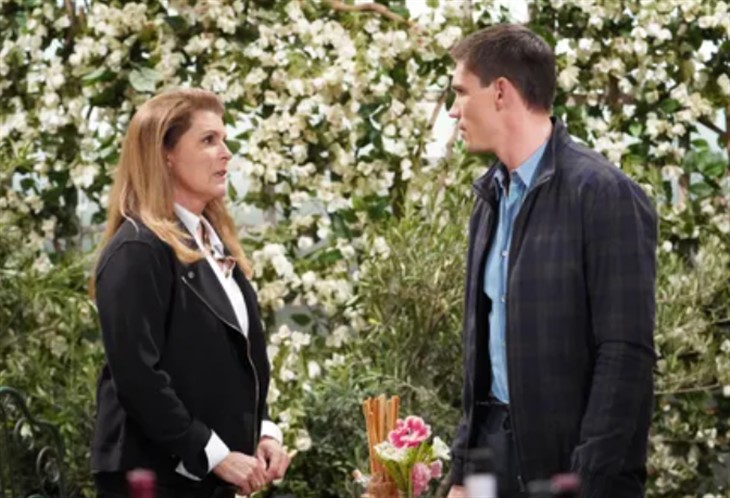 The Bold and the Beautiful spoilers document that Sheila Carter’s (Kimberlin Brown) next attempt to bond with John Finn Finnegan (Tanner Novlan) is slick. As fans recall, Sheila is a nurse by trade.

Teasers indicate that Sheila will unexpectedly arrive at her son’s office at the hospital. Finn will naturally be surprised to see her and the outfit she is wearing.

Fashion will not be the point. Instead, Sheila’s nurse attire will imply that she was hired. That speculative outcome would represent a brilliant step for Sheila to take.

The Bold And The Beautiful Spoilers – Proximity And Repetition Matter

Sheila believes that if Finn has a chance to get to know her that they will bond. She can be charismatic or manipulative based on one’s point of view.

Victims of Sheila’s many schemes would classify her as manipulative. As for her aura, she might be the only person on the planet to classify herself as having charm.

If Sheila has gotten a job as a nurse, she will put herself in Finn’s path at his workplace. That, along with the number of instances when they see each other, would create familiarity.

Finn told his wife that he is abiding by her wishes. But he also admitted that he still had unanswered questions that only she could answer.

Well, two major questions were asked and answered. Sheila lied about knowing who his father was. Then, she encouraged Jack Finnegan (Ted King) to tell Finn the truth.

Jack’s tell to Finn blew up his son’s world. This time, as compared to Sheila’s reveal as his mother, feels worse, and it is. The immediate result is that Finn is reeling, which allows Sheila an opportunity to make inroads.

The Bold And The Beautiful Spoilers – Steffy Forrester Finnegan On Edge

Steffy Forrester Finnegan (Jacqueline MacInnes Wood) has not been herself since Sheila appeared out of the past at the Sinn wedding reception. Wood’s character was naturally traumatized and reacted by yelling and applying an extreme slap across Sheila’s face.

As hardcore fans recall, she was shot by Sheila years ago. So, Steffy will not have to fight Sheila alone for long.